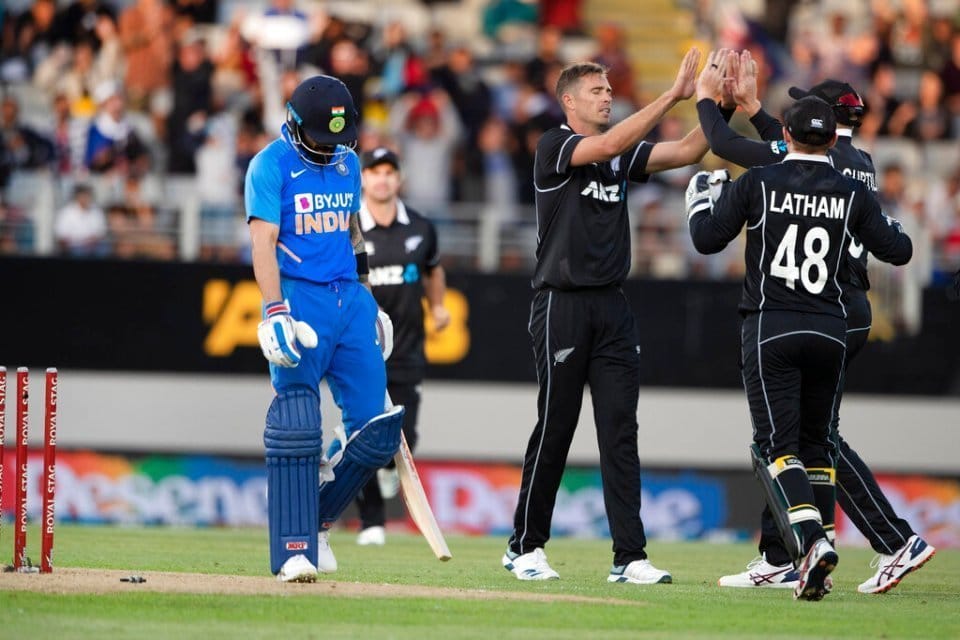 In the final match of the ODI series, both India and New Zealand went in with different objectives. While the Kiwis were eyeing a clean sweep over the visitors, India played to salvage some pride at Mount Manganui. After a much-ordinary performance in the first two ODIs, the onus was on Virat Kohli and co. to up their game in the 3rd ODI.

On a pleasant and typical New Zealand afternoon, Kiwis won the toss and decided to bowl first. Skipper Kane Williamson was back in the team after missing the first two ODIs due to shoulder injury. India roped in Manish Pandey in place of Kedar Jadhav as the only change in their playing XI.

Batting first, India yet again missed the services of their regular opening pair of Rohit Sharma and Shikhar Dhawan as the visitors couldn’t get to a great start. Mayank Agarwal, playing his third ODI, was dismissed for a paltry score of 1 in the second over of the Indian innings. The start got ever poorer for the tourists as skipper Kohli also departed soon inside the seventh over. With three wickets down for 62, Shreyas Iyer and KL Rahul got together to resurrect India’s innings.

The two stitched a crucial 100-run partnership before Iyer threw it away in the 30th over. However, KL Rahul continued his rich vein of form and got to his fourth ODI century. Rahul scored a run-a-ball 112 and rescued his team from an adverse situation. He was well aided by Manish Pandey as India managed to post 296 runs in their 50 overs. Once again, the ‘Men in Blue’ fell 15-20 runs short on a pitch that was tailor-made for batting.

The Kiwis were immaculate with their plans in restricting Indians to under 300 runs at the Bay Oval. Hamish Bennett inflicted the majority of the damage with four wickets for 64 runs.

Chasing a below-par 297, BlackCaps were backed by a strong opening foundation to begin their chase. Indians were made to toil hard for wickets. Martin Guptill was the chief tormentor with a 46-ball 66 to set up a beautiful run-chase for the hosts. The home team lost their way in the middle as Indian spinners picked wickets in a cluster to keep their hopes alive but the New Zealand lower-order showed enough maturity to take their team home in the third ODI.

Colin de Grandhomme played the much-needed hand in the final few overs to empower his team to a comfortable 5-wicket win over India. De Grandhomme scored a 28-ball 58 to guide his team to victory. For India, Yuzvendra Chahal was the leading wicket-taker with three wickets in his quota of ten overs. However, the rest of the Indian bowling looked flat and were easily outdone by a superior batting display from the Kiwis.

For his whirlwind 80 at the top of the order, Henry Nicholls was awarded the Man of the Match. Ross Taylor who ended the series with 194 runs was nominated as the Player of the series.

This is the first time since 2014 that New Zealand has managed to beat India in an ODI series. This was also the first instance since 1988 where Team India was whitewashed in an ODI series (of 3 or more matches).