Multan Sultans will face Karachi Kings in Match 16 of PSL 2021. The second leg of the sixth edition of PSL resumed with an absorbing clash between Lahore Qalandars and Islamabad United on Wednesday. In today's PSL match, the Kings will hope to continue their dominant run while Multan will look to move up in the points table. Both teams have made some changes in the squad, and both will start fresh in the second leg of PSL 2021 at UAE.

Karachi Kings are at top of the points table with six after having won three matches in five appearances so far. Multan Sultans is ranked fifth with a solitary win in the season so far. Under the leadership of Mohammad Rizwan, Sultans will aim to make

Abu Dhabi’s wicket normally produced a neutral track. Pitch will help both batsmen and bowlers as the average first inning score is nearly 160. It will be another high-scoring game at Abu Dhabi as the chasing teams got more success at this venue.

Multan Sultans had a difficult campaign in the first leg of PSL 2021, as they won just a single match out of a total of five matches and stood at second last position in the points table. They have made some changes in the squad as Windies opener Johnson Charles will place James Vince at the top of the order, along with that Obed McCoy and Rille Rossouw have been added to the squad as an overseas replacement. They will expect good performances from their overseas players, as they want to stay in the race for playoffs.

Karachi Kings had a really good campaign in the first leg of the PSL 2021 at Pakistan, as they have won 3 out of 5 matches and made themselves safe for the race of the playoffs. They have also made some changes in the squad as some of their players took back their name due to Covid-19. Chadwick Walton replaces Joe Clarke, Martin Guptil comes for Ingram, and Thisara Parera replaces Mohammad Nabi in the all-rounder section. They will look to continue their good run and hold their number one position in the points table.

Mohammad Rizwan is one of the best batsmen in white-ball cricket from the current Pakistan Team. He is having a form of his life, as he scored in every white series in recent years for Pakistan. He will open for Multan Sultans and will do wicket keeping as well. He is the highest run-scorer with 297 runs in five matches with an average of 59. He will give fantasy points with runs and keeping both, as he will be the best pick for the captain and vice-captain from this match.

Pakistan has produced so many great pace bowlers so far, and Shahnawaz Dhani is one of the best emerging T20 bowlers in this PSL 2021. The young right-arm medium pace bowler is the third-highest wicket-taker in the sixth edition of PSL 2021 so far. He picked 9 wickets in just four matches with a very good bowling average of 17. He will be the most important pick in the fantasy team as he will bowl with the new ball and in the death overs too.

Babar Azam is arguably one of the best white-ball batsmen in the world right now. The Pakistani skipper has been just brilliant in white-ball cricket. Just like in international cricket, Babar Azam is in the good touch in PSL 2021 too, as he scored 258 runs with an average of 86 in just five matches. He will look to continue his good form in the second leg of PSL 2021 as well, so he can reach his team into the finals and win the title this year.

Mohammad Amir is one of the best white-ball pacers from Pakistan. He has been good with his swing in the powerplay and good variations in the death overs. As the second leg of PSL 2021 moved to the UAE, the track of Abu Dhabi will assist the pacers in the early stage of the tournament. The new ball will be moved both sides under the lights as Mohammad Amir becomes a very important pick from the bowling section. He can demolish any top order with his swing. The right-arm fast bowler took 4 wickets in five matches in the first leg of PSL 2021. 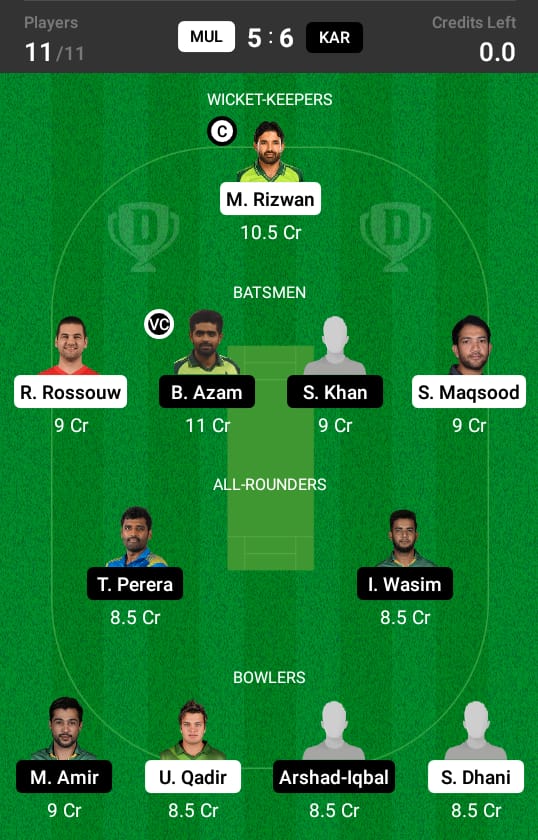 Dream11 Match Prediction – Who will win the MUL vs KAR PSL 2021 Match?