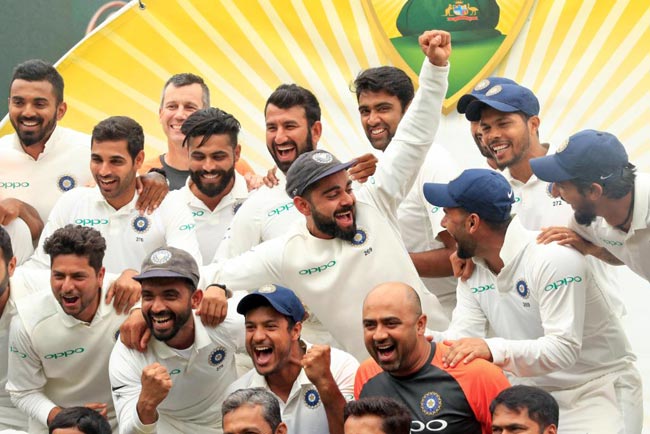 Indian selectors recently announced the Indian squad for the tour of Australia 2020 across all three formats. The tour down under will be India’s maiden international fixture post the pandemic. The Virat Kohli-led side will feature in a three-match T20I series, followed by 3 ODIs, and a four-match Test series. The Tests will be played as a part of the ICC World Test Championship as the top two sides in the Test Championship lock horns in an anticipating Test series. The four-match series will kickstart with the first Test as a Pink Ball encounter in Adelaide on December 17.

Both sides will be upbeat going into such a major Test series. India will feel confident after their successful outing against Australia in 2018/19. However, the hosts will be bolstered by the return of David Warner and Steve Smith to strengthen their weakened batting lineup. The first Test as Adelaide will be India’s first away Pink Ball Test while Australia continues to boast of a winning streak of seven matches before they play India in the first Test of summer 2020.

India Squad for the 4-match Test series against Australia

Here’s a look at a Probable Predicted Playing XI for India for the Pink Ball Test against Australia in Adelaide:

Mayank Agarwal has had a brilliant Test career so far scoring 974 runs from just 11 games at an average of 57.29 including three centuries. His consistency to score big runs at the first-class level has allowed him to be better prepared for playing longer innings even in Test cricket. In December 2018, Mayank made a rollicking start to his Test career in the Boxing Day Test against Australia. On his maiden tour of Australia, The Karnataka-born player scored 195 runs in just four innings with a couple of fifties to secure his place in the opening slot.

Shubman Gill might make his Test debut against Australia as India’s second opener in their playing XI for the Pink-Ball Test as Adelaide. Gill might face stiff competition from Prithvi Shaw for the second opening slot. But Gill’s improved performances in the couple of tour games against Australia A might put him ahead of Shaw in the race to grab a spot in the playing XI. In all likelihood, India might open with the pair of Agarwal and Gill in the Pink Ball Test at Adelaide.

India boasts of a really settled middle-order with the likes of Chetshwar Pujara, Virat Kohli, and Ajinkya Rahane. While both Pujara and Kohli are certain in the Playing XI, Rahane’s position might be in doubt based upon the team combination. However, it is highly likely that the management will stick with the experience of the Mumbaikar for the Day-Night Pink Ball Test against Australia 2020.

In 2018/19, Chesteshwar Pujara was the difference between the two teams in what turned out to be a historic series for Team India. He scored an incredible 521 runs from four games at an average of 74.43 including three centuries. Indian skipper will yet again enjoy batting at Adelaide, which also happens to be one of his happy hunting grounds in Australia. Rahane will have the onus to convert his fifties into big innings which can completely rule the opposition out of the game in the lower order.

Hanuma Vihari has been impressive in the nine Tests that he has played for India since 2018. The Andhra Pradesh batsman has faced some of the toughest conditions at such an early age in his Test career. Out of the 9 Tests, Vihari has played eight matches outside the sub-continent. However, his willingness to take up any role for the team’s cause has earned a lot of praise for all corners. He can even contribute with the ball which makes him a utility player for the side.

Wridhhiman Saha is likely to feature in India’s Playing XI against Australia in the Pink Ball Test at Adelaide. With the tendency of the ball moving after pitching, Saha might get a nod ahead of Pant despite the latter’s edge in the batting. There’s no doubt that Saha is rated highly in terms of his wicket-keeping skills, however, the 36-year old will have to contribute with the bat to secure his place in the playing XI for the rest of the series.

Ravichandran Ashwin is likely to feature in India’s playing XI for the Adelaide Test as the lone spinner. The off-spinner bowled brilliantly in the first tour game against Australia A picking up two wickets in the first innings. Despite having a dismal record on the Aussie soil, India is likely to go in with Ashwin as their premier spinner in the Pink-Ball Test.

The Indian fast bowling attack should comprise Mohammad Shami, Jasprit Bumrah, and Umesh Yadav. With Ishant Sharma already ruled out of the Test series, Umesh Yadav is likely to be India’s third seamer in the first Test as Adelaide. A lot will rest upon the shoulders of Bumrah and Shami to carry the workload of the fast bowling through the series. Yadav bowled some decent spells in the first tour game against Australia A. The Indian team management would hope that the pace trio would cause enough troubles to the rejuvenated Aussie line-up.