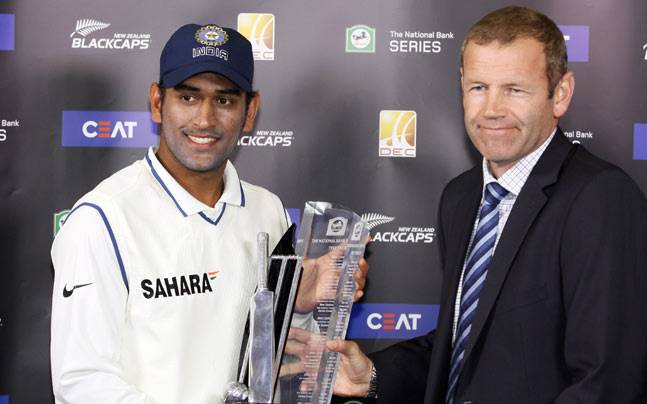 India vs New Zealand Test records has gained more popularity in recent times due to stiff competition between the two powerhouses. The two Test-playing nations locked horns for the first time in a drawn Test in 1955. It took India only two Test matches to register their first win vs New Zealand while the BlackCaps took nearly 13 years (and 11 Tests) to get the better of India in Test Cricket.

Ever since India and New Zealand have gone up against each other on 59 occasions in Test cricket. The number of Test matches played between the two sides is not too many, which is rather inconceivable. However, the fans will hope that the recent World Test Championship Final between India and New Zealand would inspire more frequent face-offs in Test matches between the two teams.

Here's a closer look at the IND vs NZ head to head Test records, Stats, and history:

In the 62 India vs New Zealand Test matches played since 1955, the ‘Men in Blue' have a superior head-to-head record with 22 wins. On the other hand, Kiwis have won 13 matches while 27 Tests have ended in a draw.

It is quite evident in the head-to-head Test records between India and New Zealand that both teams have been dominant at their home turf. Since the inaugural IND vs NZ Test series, teams have struggled in away conditions as the tale continues to repeat itself even today. New Zealand hasn't won an away Test series against India while under the leadership of MS Dhoni, ‘Men in Blue' claimed their first-ever Test series win in New Zealand in 2009.

Rahul Dravid enjoyed playing against New Zealand on many occasions. The ‘Wall,’ as he was commonly known, was able to consistently deliver whenever India faced New Zealand. The Kiwis suffered immensely at the hands of Dravid, who hit an average of 63.80 in his 28 innings. There were also six centuries including a 222.

Sachin Tendulkar came close to matching the record held by Dravid. Despite playing two years after Dravid had concluded his career, Tendulkar finished short in second place. Generally, Tendulkar has dominated many of his opponents, but he only averaged 46.91 against the Kiwis. In 24 matches, Tendulkar hit 1595 runs.

Brendon McCullum was the top Kiwi batsman when it comes to games against India. In just six years of facing India, Brendon McCullum was able to hit 1224 runs from just 10 matches. This provided him with an average of 68 – the highest among the top five batsmen.

GT Dowling happens to be the oldest on this list. The New Zealand batsmen faced India on 11 occasions from 1965 to 1969. He was able to hit 964 runs from the 22 innings with his highest score of 239 coming out against India during this run.

Taylor is the newest entrant into the list of top batsmen in India vs New Zealand head to head numbers. Even though he has taken 17 matches to hit 890 runs, Taylor has been able to leapfrog the 885 runs set by Sutcliffe – albeit at an average of 68.07. Taylor makes it to India vs New Zealand head to head list of top batsmen with an average of just 30.68 – the lowest among the top five.

Ravichandran Ashwin has experienced immense success when it comes to India vs New Zealand head to head numbers. He has been able to get catapulted to the top of the charts with 66 wickets from just nine matches. The figures were quite impressive for Ashwin, who has an average of just 15.43. Ashwin manages to feature in the top five list when it comes to the best bowling figures in a match. He was able to get 13 and 12 wickets in the 2016 and 2012 test matches against New Zealand.

Richard Hadlee was at the top of the charts for a long period before being pushed down by Ashwin. His 65 wickets place him as a very successful bowler in India vs New Zealand head to head numbers. An average of 22.96, though, is the least among the top five bowlers.

BS Bedi comes in third with 57 wickets from his 12 matches. He was able to achieve an average of 19.14 – the second best in the top five list. One of the best innings from Bedi in a match against New Zealand came in the 1976 test match in January when he hit nine wickets for 70 runs.

EAS Prasanna has been pushed down to 3rd place with his 55 wickets and had a serious danger of being overtaken by new bowlers. He was able to hit these 55 wickets from just 10 matches translating into an average of 20.12. His best bowling figure of 8/76 is also the best among the top five in India vs New Zealand head to head numbers.