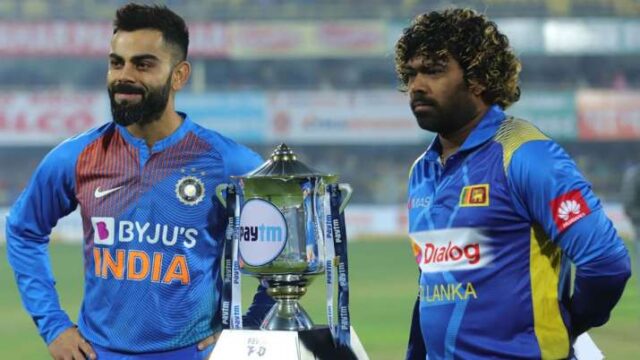 India and Sri Lanka, the two neighbours have enjoyed a great rivalry in cricket in the past. It is only in recent times that Sri Lanka cricket has faced a dearth of quality players who can lead their country at the international level. Of late, a lot of IND vs SL head-to-head matches have been one-sided affairs with the Island failing to stand tall against the might of India's depth across formats. For a long time, India and Sri Lanka were together touted as two powerhouses, especially in limited-overs cricket.

The two nations have played some remarkably close and intense matches across formats. The ICC World Cup Final 2011 could be regarded as a premier India vs Sri Lanka clash at the pinnacle of the sport. From the turn of the century until the late 2010s, India played a lot of matches against Sri Lanka. The likes of Kumar Sangakkara, Mahela Jayawardene, and others took guard for the Islanders while Sachin Tendulkar, Sourav Ganguly, and the likes led India's baton.

Over the years, India vs Sri Lanka head to head matches has been a pleasing cricket experience for fans across the two nations. Sri Lanka is slated to tour India for a limited-overs and T20 series in the early part of 2023. It will be interesting to watch if the visitors can challenge the Indian outfit who are generally very strong at home. India has not suffered a test defeat at home at the hands of Sri Lanka in the entire history of this fixture.

Here's a closer look at the IND vs SL head to head records, Stats, and history:

If the head-to-head records are taken into consideration, India has had a clear upper hand over Sri Lanka in the ODIs. In 165 matches between the two countries, the ‘Men in Blue' have emerged victoriously on 91 occasions. On the other hand, Sri Lankans have come up trumps only 56 times. The difference is even stark in the recent few years where India has exhibited complete dominance over Sri Lanka in the head-to-head rivalry.

In the shortest format of the game, India and Sri Lanka haven't met too often. In only 20 encounters, India again has an edge over Sri Lanka with 14 wins. In the upcoming 2021 series, SL will hope to improve their head-to-head record in T20Is against India.

Out of the 46 Test matches played between India and Sri Lanka, India has won 22 Tests while Sri Lanka has managed to win 7 games. Traditionally, both the teams have relied upon their spin bowling and their long batting depth to win games in the Test format. In the head-to-head contest, India easily dominated the Lankans in a one-sided affair. India vs Sri Lanka head to head numbers has seen an overwhelming dominance from India, especially in the home test games against this opponent.

Interestingly, Sri Lanka has never been able to defeat India in an away Test match since 1985. Considering the overall records between the two countries, India has dominated their neighbours across all formats.