The wait is over. The IPL 2023 auction has arrived. The Indian Premier League is one of the most followed sporting events in the world. Its popularity and footfalls have increased immensely since its inception in 2008 because of the amount of excitement and thrilling clashes it presents.

In the last season, we got new champions in Hardik Pandya’s Gujarat Titans (GT), while the other new team Lucknow Super Giants (LSG), introduced last season, didn’t make an impact.

As always, we expect to see intense bidding battles for numerous players among 10 IPL franchises right at the auctions in an attempt to produce the best results on the field.

As per the list of retained and released players submitted by the franchises by 15 November, all 10 franchises have retained nearly 163 players and at least 85 players have been released. The table below shows the list of all the players who will be up for grabs in the IPL 2023 auction.

Due to two new IPL teams – GT and LSG, the previous IPL auction was a full-fledged affair, which means the IPL 2023 auction will be a mini-event.

As many as 405 players will be available for grabs as 10 IPL franchises will clash for the IPL 2023 mini-auction. Of these 405 players, 273 are Indians, and 132 are overseas players. Also, 110 of them are capped players, while 282 uncapped aspiring players will hope to get a buyer. Though, in the IPL 202 mini-auction, all the franchises can buy a maximum of 87 players, out of which 30 slots are for overseas players.

The IPL 2023 mini-auction will be played out in 5 sets. The first set is meant for the batters, then all-rounders, followed by wicketkeepers, fast bowlers, and spin bowlers. The auctions for the capped players will be conducted in these five sets, and then the bidding for the uncapped players will follow the same five sets. Out of all 10 franchises, Sunrisers Hyderabad have the biggest purse of INR 42.25 Cr, which they can use to buy up to 13 players, including 4 foreign players. There are 11 slots available in KKR, but they can spend only up to INR 7.05 Cr. LSG, as mentioned, have only INR 5 Cr, and they have 10 slots to fill up. Here are answers to a few commonly asked questions for the benefit of the readers.

Yes, IPL 2023 auction is going to be telecasted on the Star Sports Network.

Yes, IPL 2023 auction will also be telecasted live on the online platforms of JioCinema (the app) and its website – https://www.jiocinema.com.

Each time can have a maximum of 25 players before the auctions, including 8 overseas players. After the auctions, the franchises can have only up to 18 players in their final squad. 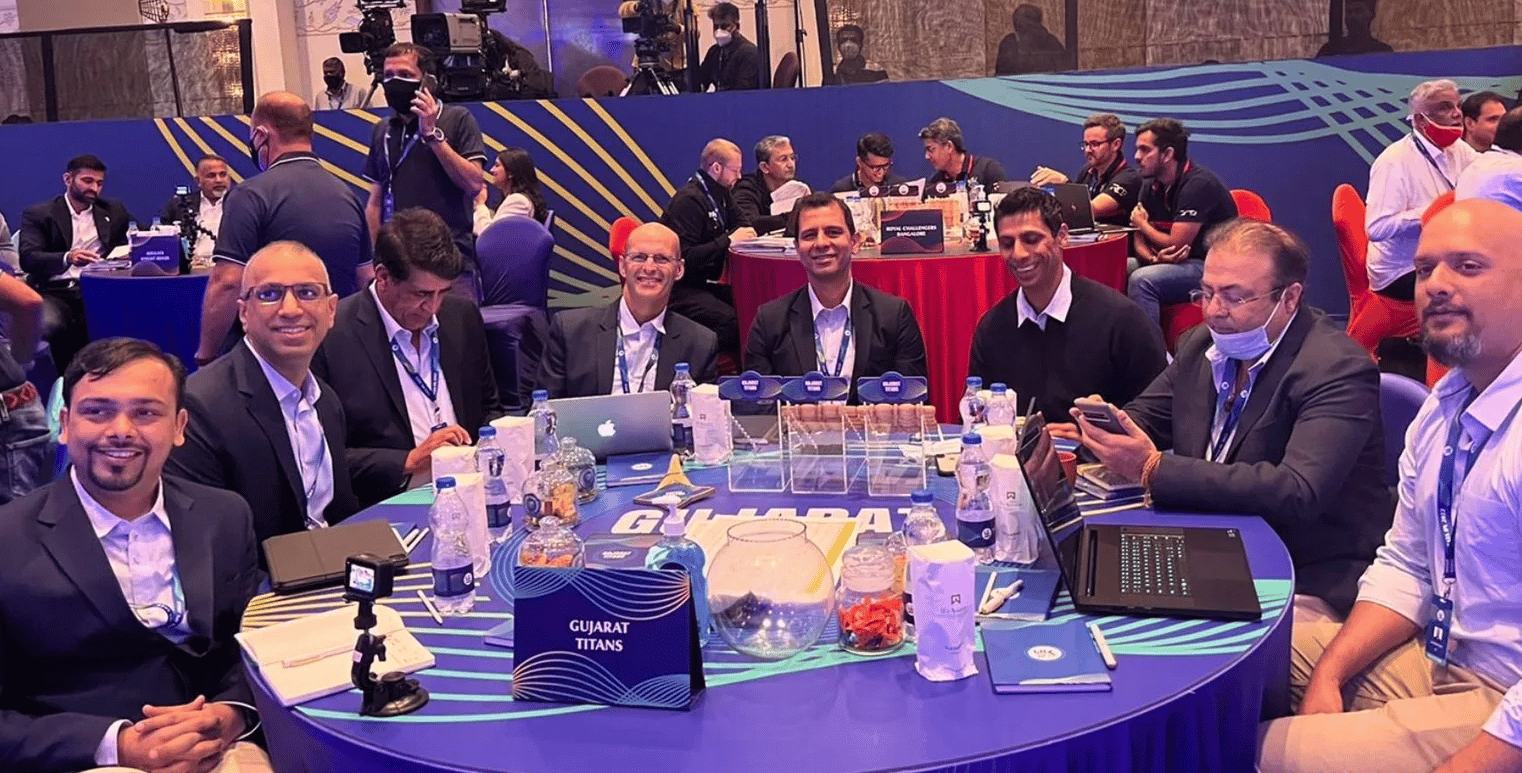 In IPL 2023 auction, all the franchises can use up to INR 5 Cr (INR 50 million) in addition to whatever amount they could save at the end of the previous auctions. For example, Gujarat Titans had spent INR 75.75 Cr in the previous auctions and saved INR 14.25 Cr. With additional INR 5 Cr Rupees, they can spend up to INR 19.25 CR this time to fill in the 7 vacant slots in their squad. It’s a boon for a team like Lucknow Super Giants, as they had exhausted all their money during the previous auctions, so they have at least INR 5 Cr to spend now.

As per the mini auction IPL 2023 rules, the Right To Match (RTM) card will allow a franchise to buy back a vital player whom the franchise had to release earlier. The RTM option was suspended during the previous auction due to the addition of two new teams (GT and LSG), but it’s brought back into action for the IPL 2023 auction. With RTM, a franchise can still retain a released player by matching the highest bid placed for him during the auctions.

Highlights of the IPL 2023 Auction day

The IPL Auction 2023 happened as expected by fans with some mind-blowing bids. All rounders owned the majority of the purse spent today, followed by the batters. It turned out to be an early Christmas gift for English players recently crowned as the World T20 Champions. The first bid went for more than 15 minutes. The all-format star Harry Brook who recently smashed three centuries in the Test series against Pakistan with a strike rate of T20s, was picked by Sunrisers Hyderabad for INR 1325 Lakhs (13.25 cr.).

Player of the tournament Sam Curran went for a whooping price of INR 1850 Lakhs (18.5 cr) to return to his first IPL team Punjab Kings. It will be interesting to see how PBKS will utilize him as an all-rounder. The second biggest bid was made for the in-form Aussie all-rounder Cameroon Green. Green was bought by Mumbai Indians for INR 1750 Lakhs (17.5 cr). This is part of the long-time investment Mumbai is considering under their next 10-year plan.

Ben Stokes found himself re-united with Mahendra Singh Dhoni and Stephen Fleming at Chennai Super Kings. The trio was part of the Rising Pune Super Giants squad. Stoke’s inclusion in the middle will give stability to the CSK squad.

Everyone got surprised by the 2 million dollars LSG spent on Nicholas Pooran. Pooran, who had once scored 85 runs in 12 innings of the IPL 2021, fought back last year with 306 runs at a strike rate of 144.21. KL Rahul hopes that Pooran will keep the continuity of last year's fearless cricket.

With all the big money spent on the international players, Mayank Agarwal stood out as the Indian player with the highest bid received. He went to SRH for INR 825 Lakhs (8.25 cr.). With Agarwal, SRH filled the hole created by letting Kane Williamson go.

Indian bowlers went 15 times their base value! While Shivam Mavi fetched the deal of INR 600 Lakhs from Gujrat Titans, Mukesh Kumar also had a big payday. Kumar received INR 550 Lakh (5.5 cr.) from DC. Kumar was a much needed buy for Delhi in the absence of Khalid Ahmed. Jammu Kashmir’s Vivrant Sharma, a net bowler last season, was picked by SRH for his batting skills. Impressed? He got INR 260 Lakhs (2.6 cr).

Best Base Price Bargains: Sikandar Raza to PBKS, Kane Williamson to GT, Adil Rashid to SRH, Reece Topley to RCB, and Kyle Jamieson to CSK were the best base price bargains of the auction.

Silent Spectators:  With the lowest purse and maximum vacant spaces, KKR remained calm during the initial phases, finally landing N Jagadeesan for 90 Lakhs (0.9 cr). KKR tried 6-7 openers last season. Jagadeesan will solve the problem this season. And those 5 back to back hundred in Vijay Hazare Trophy are enough for him to directly walk into the playing 11. KKR then went to grab Shakib al Hasan and Litton Das at the end of the auction.

Last Minute Shopping: Rilee Rossouw was the only player left unsold in the first group of the auction. But he made Delhi spend INR 460 lakhs (4.6 cr) for his services this year. Santa finally got a gift for Joe Root as he found his first team this year. He went to Rajasthan Royals for his base price of INR 100 Lakhs (1 cr.).

Hopefully, the IPL 2023 will turn out to be as eventful as the auction. Watch this space for exclusive coverage of the upcoming IPL season.