The 13th edition of the Indian Premier League (IPL) is still more than a month away, but it has begun to form the headlines, especially on social media. Social Media platforms have become a great source of information. It is normal for fans to follow their beloved stars and their IPL clubs on platforms such as Twitter and Instagram.

The IPL franchises are quite active on social media even in the off-IPL season. Most of the teams tend to maintain a close eye with regular updates regarding their players performing for their respective national or domestic teams during the time after IPL. Royal Challengers Bangalore, a team with a high fan base, regularly posts videos and images to keep its fans engrossed and updated with their players' activities.

In one of the latest activities on the Social media, Royal Challengers Bangalore has sparked curiosity among its fans. The franchise, which was quite active much after the 3rd ODI between New Zealand and India, suddenly removed its logo and cover image from both Twitter and Instagram profiles. It was surprising for all the fans with the franchise not making any confirmation about the change of logo or a probable change in sponsor for the season ahead. 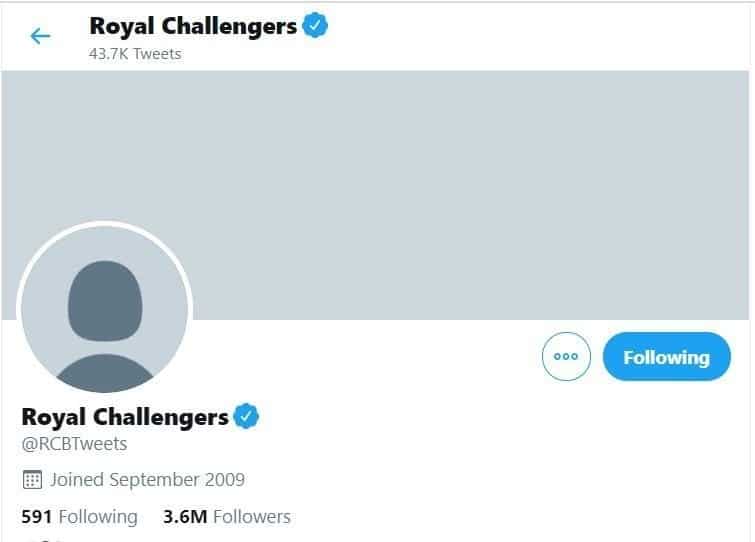 The fans were also left to speculate whether both the Twitter and Instagram profiles have been hacked or is it just a deliberate move from the franchise to bring a change ahead of the new season. Even in the past, the IPL teams have resorted to such policies by causing a feeling of anticipation among the fans to grab their attention before releasing out a major update.

The fans also believed that it might also be a tactical move by RCB in order to bring about a change in their fortunes before the IPL season.

However, as the fans wait for any official confirmation, nothing can be presumed despite an air of doubt that revolves around the matter.