From Allan Border to Sunil Gavaskar, Steve Waugh to Sourav Ganguly, and now Steve Smith to Virat Kohli, the Australia-India cricket rivalry has featured numerous legends. The latest chapter of this rivalry will unfold at the T20 World Cup 2022.

Even today, if one team can challenge the Australian win-at-all-costs mentality, it is the fearless Team India.

The great competition will likely continue when the two giants lock horns at the upcoming T20 World Cup 2022. The ICC number 1 ranked T20I team India has just beaten the Kangaroos 2-1 at home. The Men in Blue will look to carry on the momentum in the upcoming marquee event.

India drew first blood when they defeated Australia in the semifinals of the inaugural T20 World Cup. Yuvraj Singh demolished the Aussie bowling line-up with a sensational 30-ball 70. His heroics came after the solid opening partnership by Gautam Gambhir and Virender Sehwag. MS Dhoni and Robin Uthappa pitched in to take India to 188/5.

India won the toss for this Group F match and decided to field. Australia made them pay for their decision quickly as Shane Watson (54 off 32) and David Warner (72 off 42) launched the innings in style. Australia finished with 184 in their innings.

India, in reply, collapsed and never stood a chance. They were 97/8 before Rohit Sharma (79* off 46) and Harbhajan Singh (13) put some respect to the score. India lost the clash by 49 runs.

Another drubbing at the hands of Australia awaited India. India won the toss and batted first in the Super Eight match. Regular fall of wickets meant India could only put 140 on the board thanks to Irfan Pathan’s 30-ball 31.

The dreaded Australian opening pair again shut the game on India with Shane Watson (72 off 42) and David Warner (63* off 41) leading the team to a 9-wicket win.

On the slow Dhaka track, Australia chose to bowl first in the group match. Despite the sluggish pitch, Yuvraj Singh fired a 43-ball 60 to take India to 159 runs in 20 overs. Australia was never in with a chance and lost half the side at 55. They were bundled out for 86 with off-spinner Ravichandran Ashwin picking 4 wickets for 11.

Facing India in Mohali, Australia elected to bat first. Despite getting off to a flyer with a 54-run opening stand, the visitors could only manage 160 in 20 overs.

The chase wasn’t straightforward for India either. Shikhar Dhawan, Rohit Sharma, and Suresh Raina got out cheaply while Yuvraj’s slow 18-ball 21 increased the required run rate. That’s when Virat Kohli stepped up, with an unbeaten 51-ball 89 to take India home with 5 balls to spare.

While India won the first edition of the ICC T20 World Cup in 2007, Australia lifted the title in the very recent 2021 edition in Oman and United Arab Emirates. So, both teams would be eyeing to register their names on the trophy one more time.

After a disastrous Asia Cup 2022 campaign, the selectors have chosen a perfect mix of youth and experience for the elite tournament. Ravindra Jadeja’s unavailability will be seriously felt, though.

The host nation and defending champion have not disturbed their previous years' winning combination. The only exception is Tim David. The brute aggressor has earned his place with his blistering all-round performances across various world leagues. 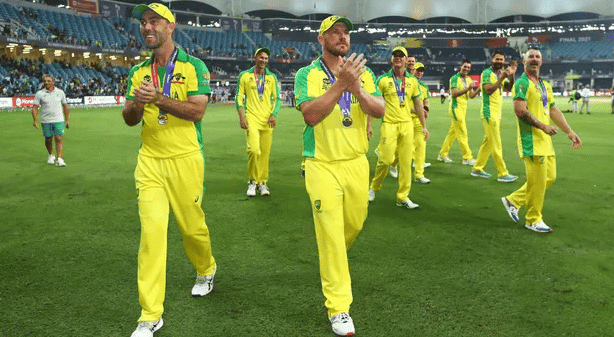 The batting genius marked his return to form with his sensational 100 in Asia Cup against Afghanistan. King Kohli is no mug as an opener and can single-handedly stitch a paradise for India in powerplay overs.

The best Indian batter in Australian conditions has more than 3700 runs, averaging 50.84. He is the leading run-scorer against Australia, amassing 794 runs in 22 matches, with a staggering strike rate of 143.84.

The unorthodox Mumbai Indians star is the finest 360-degree batsman and the top scorer for India at number 3 in the T20 format. With optimum bounce, Australian pitches will be ideally suited for his daredevil approach in the game.

The Aussies recently got rocked with his brilliant series-winning knock of 69 runs in 36 deliveries in the third and final T20I at Hyderabad. Surya’s stunning strike rate of 176.81 becomes even more decimating at 185.48 when he plays against the kangaroos.

The Victorian led his country to their maiden T20 World Cup victory in 2021. With two of the top three highest individual T20I scores on his name, the captain of Australia will look to defend the crown on home soil. The first Aussie to complete 3,000 runs in the T20I format during the recent match with England, Finch had suffered a slump in form in 2022, averaging only 28 in his 15 matches.

The steering knock of 58 against West Indies in the first of the two bilateral matches just before the World Cup, may just boost his confidence, though. Australia won by three wickets. The aggressive opener has a classy strike rate of 144.38 and is well poised to reach the milestone of 100 T20I matches during the World Cup.

His unforgettable 41 of just 17 balls against Pakistan in the semi-final, will arguably remain the best knock of the T20 World Cup 2021. The specialist finisher is in red-hot form going into the mega event due to start in less than a week. Known for his grit and mental toughness, the hotshot middle-order batsman will surely be the key to Australian success in the mega event.

At 51.28, Wade has one of the best averages playing against India. The career strike rate of 133.10 also rockets to 154.74, clearly showing his liking for Indian bowlers.