Cricket is among the most popular sports globally. In that sense, cricket leagues are no less than festivals around the world. Throughout the year, different cricket tournaments keep us hooked. However, the most coveted of them all are World Cup Tournaments. Initially, there was World Cup for only 50-over matches. However, looking to the popularity of short-form cricket, T20 World Cup started in 2007.

Ever since then, this tournament has had its own spark and cult following. If you are too a fan of cricket, you have just witnessed a spectacular T20 World Cup 2022. We have curated this T20 World Cup Winners list to remind you of the journey so far! One of the famous cricket series celebrated internationally is the Men's T20 World Cup. It is organized by International Cricket Council (ICC). A total of 16 nations participate in the tournament. The teams are selected on the basis of their ICC T20 ranking. This tournament is held every 2 years.

Let's take a look at the winners of previous T20 world cup editions to warm up for the T20 world cup 2022 mania. Check the list below:

The very first edition of ICC T20 was held in 2007 where South Africa was the host. The final match was between India and Pakistan with India lifting the cup. Currently, West Indies (2012 and 2016) and England (2010 and 2022) are the most successful teams in the T20 World Cup winners list winning the title twice.

In the recent edition of the World Cup, Australia was announced as the host of the tournament, which went on to be held from 16th October 2022 to 13th November 2022.

Australia, Afghanistan, Bangladesh, England, India, Pakistan, New Zealand, and South Africa were in the Super 12s in the T20 World Cup 2022 standings. Nambia, Scotland, Sri Lanka, and West Indies had to play the qualifiers preceding the main draw. Namibia and UAE went out in group A while Scotland and West Indies also failed to progress past group B.

The first T20 world cup final match was played in Johannesburg on 24th September 2007 between India and Pakistan. Under the captainship of Mahindra Singh Dhoni, India won the toss and chose to bat first. India scored 168 runs, and Pakistan tried chasing the target but lost early wickets. Gautam Gambhir played astounding innings of 74 runs, and Rohit Sharma scored 30 runs on 16 balls. In the last over, the Pakistan team was under pressure for 13 runs to win the title, but they couldn't make it. Thus, India won the title of the T20 world cup 2007 championship.

In the T20 world cup 2009, Pakistan and Sri Lanka fought the final match on 21st June 2007. Tillakaratne Dilshan lost his wicket in the very first over, and this was the point when Sri Lanka lost its grip on the match. Only Kumar Sangakkara played well from Sri Lanka by scoring 64 runs which helped the team to reach 138 runs in total. Pakistan team successfully touched the target on the scoreboard with the astonishing fifty by Shahid Afridi. Thus, Pakistan won the T20 world cup 2009 championship. T20 world cup 2010 final match was played between England and Australia. Although the team lost the tournament's first game against West Indies, with their rocking performance in all the other matches, they won the T20 world cup 2010 trophy. Kevin Pieterson was given the title of “Player of the series”. The West Indies was the host of the match but the host lost to the visitors.

The 4th T20 world cup was held in Sri Lanka where West Indies and Sri Lanka clashed for the cup. Under the captaincy of Darren Sammy, West Indies became T20 World Cup 2012 champions for the first time. West Indies had won the toss and chose to bat. The whole team put up a score of 137/6. The incredible performance by Marlon Samuels helped the team to reach 137. Then, the Sri Lanka team tried their best to touch the target of 138, but they all were bowled out at only 101.

The T20 World Cup 2014 final match was played between India ad Sri Lanka in Dhaka on 6th April 2014. India got the chance to bat first, but they lost the game. Virat played well and scored 78 runs, but the slow innings by Yuvraj Singh decreased the run rate. India scored 130 runs in all. Sri Lanka chased the target successfully through the starling performance by Kumar Sangakkara with 52 runs on 35 balls. Finally, the winner of the T20 world cup 2012 was Sri Lanka.

West Indies and England played the final match of the T20 world cup 2016 in Kolkata on 3rd April 2016. West Indies won the trophy for the second time by beating England. England's team scored 156 runs, and the west Indies successfully reached the target on the scoreboard. Marlon Samuels was the man of the match due to his commendable performance of 84 runs.

Both teams came into the match looking for their first success in the T20 World Cup winners list. Both teams had a relatively comfortable victory in the semi-final with Australia seeing away Pakistan while New Zealand was able to overcome England. There are more similarities in place between Australia and New Zealand, who had a second-place finish in the Super 12.

In the match, Australia was able to come out on top in the toss and they chose to bowl first. This turned out to be a difficult decision with the batting-friendly pitch aiding New Zealand to post a comfortable 172/4 in 20 overs. Kane Williamson was the star for New Zealand after hitting a whopping 85 from just 48 balls. The target, however, proved too small for Australia, who were able to dominate with the bat with Mitchell Marsh spearheading the attack. Marshall was able to finish with a 77 not out from just 50 balls as Australia were able to chase the total with seven balls to spare and they lost only two wickets in the course of the game. 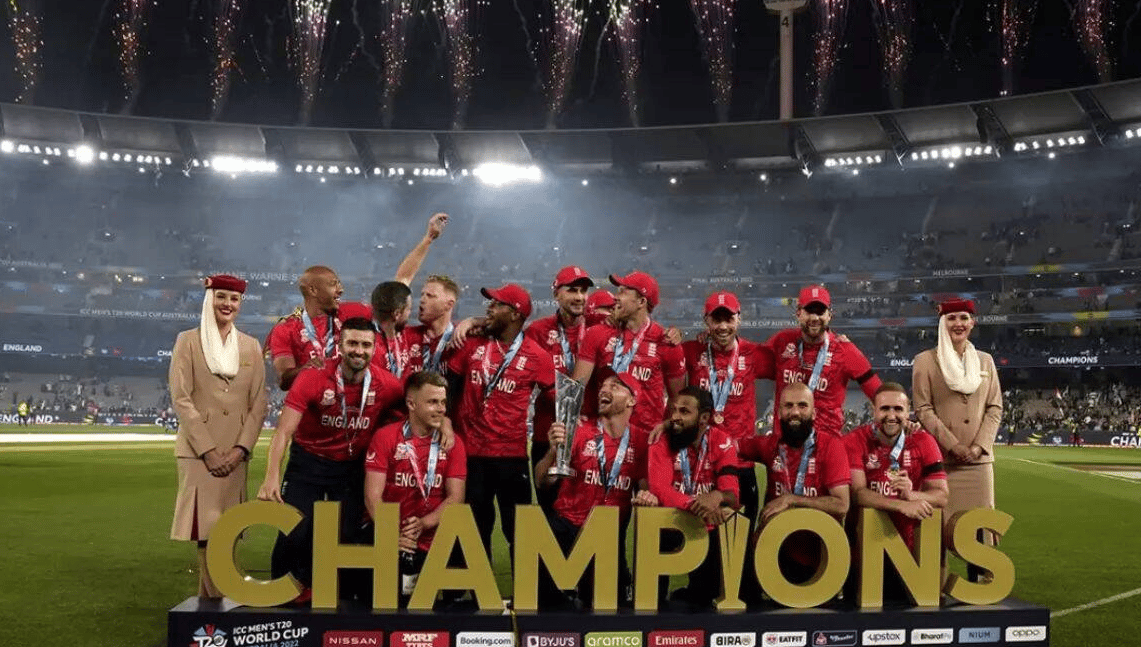 England was able to capture a second spot in the T20 World Cup winners list after getting a comfortable five-wicket victory over Pakistan in the final at Melbourne. This was a repeat of the ICC ODI final game. Both teams had a lot of good results coming into the match and there was enough reason to expect a very tight game. However, Pakistan could only come up with a very poor total of 137/8 after being sent in to bat.

There were very few positives for Pakistan’s batsmen with Shan Masood and Babar Azam posting a decent returns of 38 and 32 respectively. However, it was a strong showing from the England bowlers with Sam Curran grabbing three wickets. The chase finished quite comfortably as Ben Stokes continued his excellent form with a half-century. Pakistan bowlers were quite economical in their innings but they could not pick up wickets when it mattered the most. England went on to comfortably collect the second title in the T20 World Cup winners list.

So, these were the winners of the T20 World Cup so far. This year, we did not get a new entry on the list but it still turned out to be a fascinating battle for the T20 World Trophy.