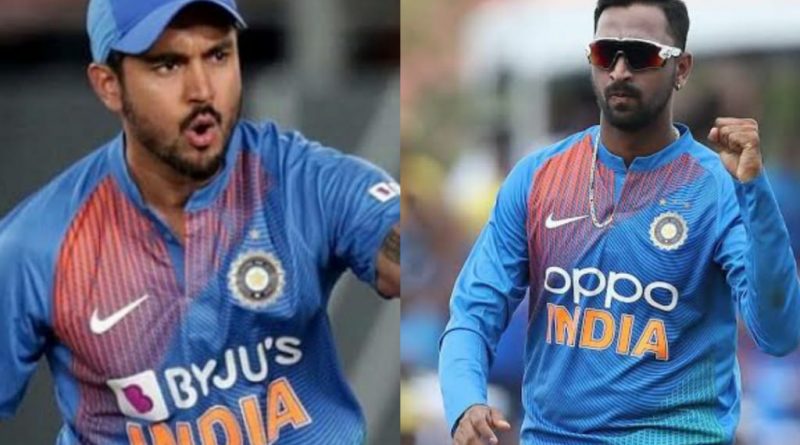 As the count-down for the ICC T20 World Cup 2021 begins, most teams are ostensibly engaged in finding their best possible squad for the T20 WC in India. It is no different for the host nation as the Virat Kohli-led side would have a few questions to answer before they pick their T20 World Cup squad in 2021. Interestingly for India, a T20I series is tentatively scheduled before the high-octane tournament in October later this year. It will allow the selectors and team management to take a final call on the inclusion of various players who can fill in the much-evident voids in India’s squad for the T20 World Cup.

On that note, the article brings into focus the 5 fringe players who might be shown the exit door ahead of the upcoming T20 World Cup. With an extended expected to be announced for the ICC event,  it will be exciting to watch if the impressive likes of Ishan Kishan, Sanju Samson, or Suryakumar Yadav make the cut as potential backup players in the squad.

We take a look at 5 players who might not be included in India’s squad for the T20 World Cup 2021:

The Bangalore-based cricketer, Manish Pandey debuted for the Indian cricket team in the shortest format of the game in 2015. However, Pandey has never been able to earn a permanent spot in the Indian middle-order despite being around the team for more than five years now. His major downfall as a white-ball player can be attributed to the lack of consistency in the limited opportunities that have come his way.

Even in the last few years in the IPL, Pandey has failed to produce any astounding performances for Sunriseers Hyderabad that could call for his inclusion in the Indian T20I squad. Pandey’s recent injuries haven’t done any good either to his chances of making it to the India T20 World Cup squad. With not many upcoming opportunities available to prove his ability in the middle-order, he might not be included in the T20 World Cup squad 2021.

Krunal Pandya is one of the latest debutants for India in the ODI format of the game. The Baroda-based all-rounder has made a brilliant start to his ODI career but is struggling to find a place in the T20 setup fr quite sometime now. The left-arm spinner is apparently grappling with some tough competition from his compatriots for the two all-rounders’ spot in the playing XI. The likes of Ravindra Jadeja, Axar Patel, and his younger brother Hardik Pandya seemingly remain ahead of Krunal in the pecking order.

Moreover, Pandya’s recent performances in International T20 cricket, as well as IPL, haven’t been too encouraging. His bowling limitations of not being a complete four overs specialist on most days might pip others to get a nod over him in the Indian squad for the T20 WC 2021. As a result, Krunal Pandya might miss an opportunity in the upcoming ICC event in India.

Navdeep Saini has been highly impressive in his first couple of years as an Indian cricketer and is a bright prospect for the Indian fast bowling unit in the years to follow. However, there is a huge scope of improvement for him in becoming one of India’s most reliable assets in the future. In the T20 WC 2021, the Delhi pacer is not expected to seal his spot in the team because of stiff competition from the other bowling majors. In the ten T20Is so far, Saini has managed to pick only 13 wickets at an economy of 7.15. With the presence of Mohammad Shami, Jasprit Bumrah, and Bhuvneshwar Kumar, Saini might fail to make the cut in India’s squad for the T20 World Cup.

Kuldeep Yadav was Kohli’s go-to bowler after India’s brilliant run in the white-ball format since the Champions Trophy exit in 2017. Despite offering variety to the Indian bowling attack, Kuldeep has been left out of the Indian T20 squad for nearly a year now. The left-arm spinner was shattered to an extent that he was even left out of the KKR Playing XI in the IPL 2021. These are the ominous signs for the Chinaman-bowler who is struggling with his consistency at the moment.

He has looked too expensive especially in the white-ball format of the game. Also, making matters worse for him is the fact that various other Indian spinners have performed outstandingly well. The right-arm leg-spinner Rahul Chahar and the uncapped Varun Chakravarthy might get the nod over Kuldeep considering their recent performance in the T20s.

Deepak Chahar could be another unfortunate player who might miss out on a spot in India’s T20 World Cup squad in 2021. Chahar, who boasts of the best T20I bowling figures, hasn’t been able to earn a permanent spot in India’s starting XI. Moreover, the return of largely experienced Bhuvneshwar Kumar, whose bowling style is akin to that of Chahar, might pip the Rajasthan bowler in India’ssquad selection for the T20 WC. With the tournament likely to be held in India, Chahar’s limitation as a pre-dominant swing bowler doesn’t offer enough hope for his inclusion in the India T20 World Cup Squad 2021.