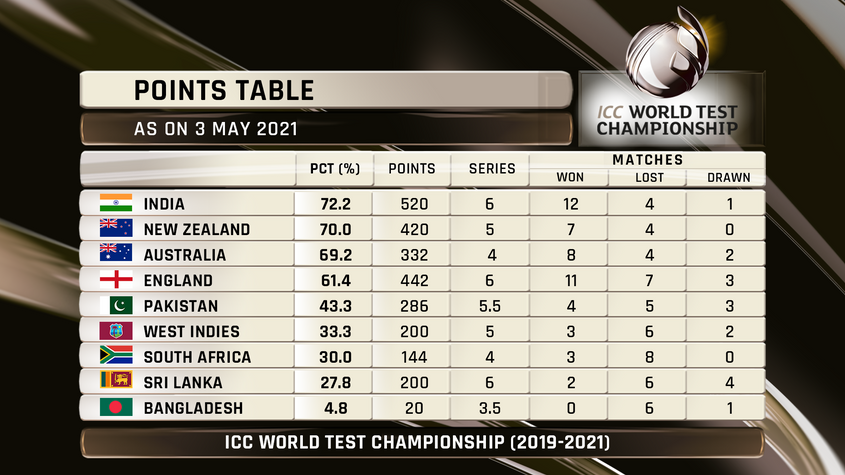 As a result, India and New Zealand, the two best teams in the last two years, claimed the top-2 spots in the points table and will feature in the WTC Final 2021. We take you through all the details that one needs to know about the ICC World Test Championship Final 2021 including the Schedule, Match Timings, Venue, expected Pitch conditions, and what can be expected from the clash.

Looking at the past trends, the pitch at Southampton's Rose Bowl stadium is marked by a typical wicket for a Test match. To start off, pace and bounce will be even for the first two days while the pitch begins to wear and tear from the second half of day three onwards. Both batters and bowlers have an equal say in most instances of the match. It is one of the few pitches in England that offer a fair amount of turn to the spinners. Hence, both teams will be wary of picking their playing XIs based on the expected pitch conditions.

Road to Final – IND vs NZ

India finished the World Test Championship 2021 as the top-ranked team among all the participating nations. The ‘Men in Blue' faced some tough challenges throughout their journey in the past two years. Except for their 2-0 loss against New Zealand on an away tour, India came up trumps in most of their other assignments during the WTC 2021. Despite all the odds, India scripted an emphatic series win over Australia in 2020-21 before demolishing England 3-1 in a four-match Test series at home. It is their sheer dominance in the last couple of years that has helped them rightfully earn a spot in the WTC Final 2021 against New Zealand.

The BlackCaps were benefitted by their long stretch of the home season that made their journey relatively easier in the World Test Championship than most teams. New Zealand began on a winning note against England at home but lost against the Trans-Tasman rivals 3-0 in an away series. However, under the leadership of Kane Williamson, the Kiwis proved to the invincibles throughout their home season in 2020. They played six Tests and won all six matches giving themselves a solid chance of making it to the WTC Final. In fact, New Zealand became the first team to seal a berth in the WTC Final 2021.

What to Expect from the WTC Final 2021- Match Prediction

Without a doubt, the WTF Final 2021 between India and New Zealand is expected to be a cracker of a contest. Both the teams have a potent bowling line-up which is much running through the opponent on any given day. However, the key for both the finalists will be the application shown by their batters in conditions that will offer greater assistance to the bowlers. The team which puts up a better batting performance is most likely to win the WTC Final in Southampton in June this year. As a result, India, with better batting resources, and far experienced middle-order, is likely to win the WTC final 2021.