The ICC T20 World Cup happening in Australia in October 2022 will feature 12 teams. The 8 teams have already qualified for the Super 12 stage which is the main stage of the T20 World Cup. The remaining 4 spots will be decided in the First Round played among the 8 qualified teams in two groups.

In this article, we will talk about some of the underdogs who might dazzle us in the upcoming 2022 T20 World Cup.

India is at the top of the ICC T20I rankings, followed by England, Pakistan, and South Africa. Apart from these, Australia and New Zealand remain among the favorites as well to win the World Cup. However, these top teams may find their plans rattled by some of the underdogs mentioned below.

Let’s look at each of them in brief and understand why we think these underdogs can create upsets in the upcoming 2022 ICC men’s T20 World Cup. Ranked 15th in ICC Men’s T20I Team Rankings, Ireland has been steadily progressing. Their key batters are Paul Stirling, skipper Andy Balbirnie and Lorcan Tucker, while Mark Adair and Josh Little have been their top performers with the ball.

In the T20, Ireland has defeated teams like West Indies, Bangladesh, and Afghanistan in the past. They have recently made an impact in ODIs too. In January this year, Ireland outclassed West Indies and won the 3-match ODI series by 2-1. Left-hand batter and right-arm spinner Andy McBrine was awarded the player of the match for his 128 runs and 10 wickets in the series.

Had luck been on their side, Ireland would have defeated New Zealand in the 3-match ODI series at home. They lost the first ODI of the series by 1 wicket, and the second match by 3 wickets. In the last ODI, they managed to score 359 in response to New Zealand’s 360 thanks to centuries by Paul Stirling and Harry Tector, losing it by just 1 run.

Earlier in June 2022, they lost narrowly to India in the second T20I of the tournament where they were chasing the steep target of 226 but fell short by 4 runs. On any other day, such narrow losses can turn into wins and upset any side in the 2022 ICC Men’s T20 world cup. Sri Lanka remained among the top teams for a long time since the 1996 World Cup win. They lost some of the greatest players like Mahela Jayawardene, Kumara Sangakkara, Muttiah Muralitharan, and Lasith Malinga and could never become the same. However, Sri Lanka seems to be coming back to form again.

In 2019, they decimated host Pakistan in the T20 series by 3-0, and in 2021 Sri Lanka won the T20 series against India by 2-1 at home. Wanindu Hasaranga was awarded the player of the series for his 7 wickets, including his career-best 4 wickets for 9 runs in the final match.

Watch out for Sri Lanka as they have a better winning ratio against teams like West Indies (53.33%), and Bangladesh (66.66%), also they have won more than 40% of the games against the teams like Australia and New Zealand. If Sri Lanka plays to their potential it can disturb the plans of some of the top teams in the 2022 T20 World Cup. The Afghans, having got their full ICC Membership in 2017, are just two positions below Sri Lanka in the ICC Men’s T20 Ranking. The team has gained popularity and affection around the world primarily due to world-class spinners and match-winning all-rounders like Rashid Khan and Mohammad Nabi who consistently play in the Indian Premier League and produce top performances.

Afghanistan has been a fabulous team in the white-ball format as well winning all of their last 5 T20I bilateral Twenty-20 series playing against the teams like West Indies, Ireland, Zimbabwe, and Bangladesh. They made their first impression back in March 2019 getting their first ever Test win against Ireland thanks to Rashid Khan’s 5-wicket haul. They defeated Bangladesh the same year, Rashid Khan once again was the hero with 11 wickets in the match.

Afghans have qualified for the Super-12 stage ahead of teams like Sri Lanka, West Indies, and Zimbabwe. Surely, some upsets are on the cards in the upcoming 2022 ICC Men’s T20 World Cup. 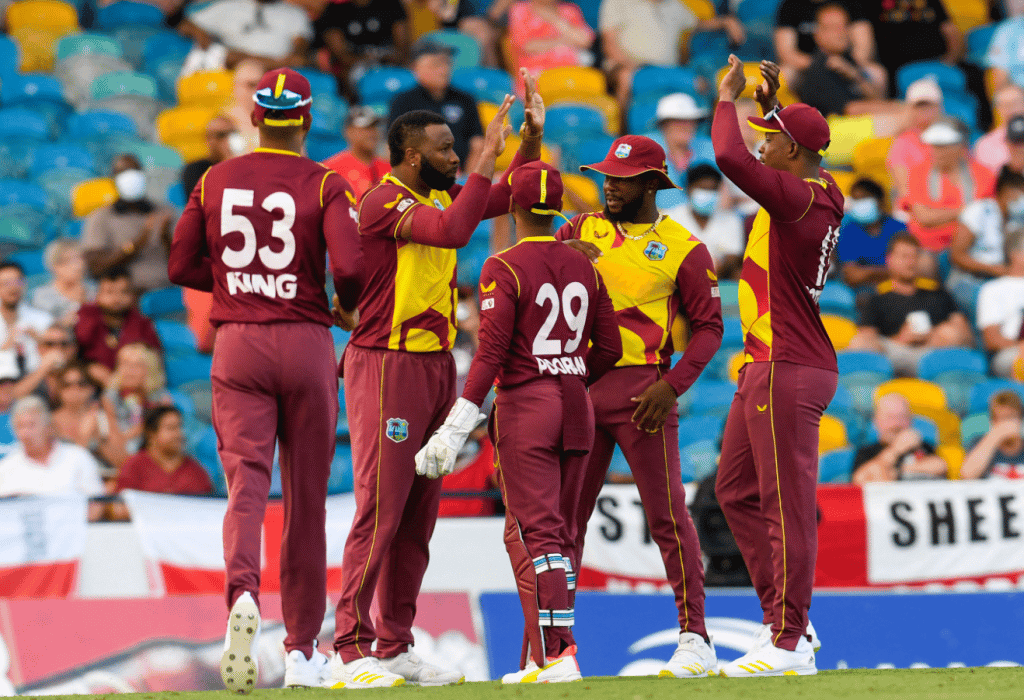 West Indies is one team that no one would dare to underestimate especially in the T20 format. For many, they are not actually the underdogs. Having won the ODI and T20 world cup Twice, they were a force to be reckoned with.

West Indies’ recent performances, however, have been so below par that they could not directly qualify for the Super 12 stage of the upcoming 2022 T20 World Cup. They are at the 7th position in the ICC Men’s T20 team rankings currently. If it’s any consolation, we find them to be the best among the underdogs for the upcoming T20I World Cup.

In ICC T20 World Cup 2021, West Indies won just 1 match out of four group-stage games. Things are beginning to change though. In January 2022, West Indies outclassed England in 5-match T20I series by 3-2. Jason Holder was awarded the Player of the series for his 15 wickets, including a 5-fer. Recently, they won the 3-match T20I series against Bangladesh by 2-0.

Nicholas Pooran has been their top performer with 742 runs from the last 20 innings at an average of 43.64. Rovman Powell (341 runs in the last 11 innings) is an excellent middle-order batsman. Among the bowlers, Jason Holder is a great asset. He has 21 wickets in the last 11 innings at an average of 15.66.  Romario Shepherd is another good pacer in the squad along with left-arm spinner Akeal Hosein who seems to be the real deal.

It will be a huge mistake to consider West Indies as a feeble opponent in the 2022 T20 World Cup. They sure are underdogs based on their performances in the last few years. However, the opponents would do well to remember that Twenty-20 is their forte, and the Windies are known to have some of the greatest T20 specialists, hard-hitters, match finishers, and outstanding all-rounders.

Twenty-20 cricket is the game of uncertainty, where a brilliant spell, a fabulous run-out, or a few consecutive boundaries could turn the match completely. It also requires a bit of luck to cross the finishing line. We look forward to underdogs like Ireland, Sri Lanka, Afghanistan, and West Indies making it tough for the top teams in the upcoming 2022 ICC Men’s T20 World Cup.