The Indian Premier League (IPL) is one of the world’s biggest franchise-based T20 cricket tournaments. It has been loved and religiously followed by cricket fans since its inaugural season in 2008. With 10 teams representing talented cricketers from all over the globe, IPL soon became a celebration of cricket. In these years, it has been a major source of entertainment for all cricket lovers. It has produced some of the most nerve-wracking matches. Here we present the best IPL match list so far.

Let's take a look at each best IPL match in detail. A list that talks about the best IPL match cannot ever rule out the opening game of the IPL. On the night of April 18, 2008, the commentators mentioned how IPL would change cricket as we knew it. Little did people know that Sharukh Khan’s KKR were about to make that statement true. Brendon McCullum opened the innings and produced magic. He came out all guns blazing to score 158 runs in just 73 deliveries and remained unbeaten. In his spellbinding knock, he hit 13 maximums and 10 boundaries.

On that night, McCullum dethroned Cameron White’s then-world record of 141* runs in a T20 match. Courtesy of that swashbuckling knock, KKR amassed 222/3 and defeated RCB who just managed to score 82 runs before being bowled out.

The next on the list is the finals of the inaugural season of IPL. It was the year when Rajasthan Royals could do no wrong under the captaincy of Shane Warne. After topping the group and clearing the qualifiers, Rajasthan was up against the Super Kings.

Batting first, CSK put up a par score of 163/5 with skipper MS Dhoni adding 17-ball 29. RR were 164 runs away from lifting the trophy. Yusuf Pathan’s marvellous 39-ball 56 got them an inch closer. The match went down to a final-over thriller which was bowled by Lakshmipathi Balaji. CSK lost the match off the final ball. The costly wide ball in that final over will always haunt CSK.

By 2010, Mahendra Singh Dhoni had become a valuable asset in the T20 scene. He officially earned the “finisher” tag. A night like this one in Dharamshala reaffirmed his title. 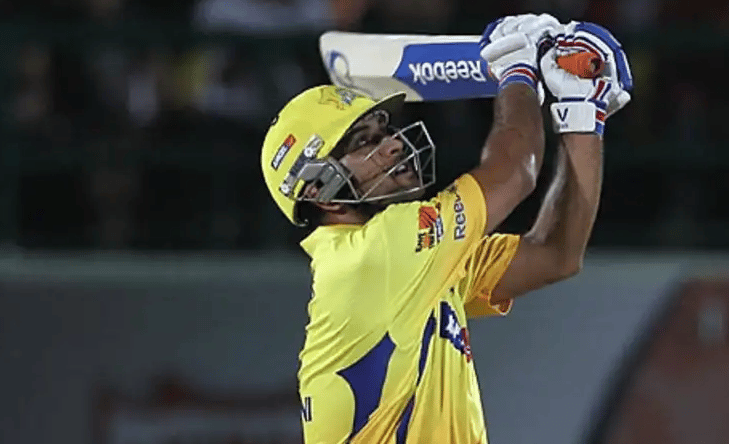 To reach the Semi-finals of the 2010 edition of IPL, this was a must-win game for CSK. KXIP pilled up a mammoth score of 192/3 after their quota. In reply, CSK were struggling to recover from 27/2 after 4 overs. It didn’t seem to be going the way of the men in yellow. It all went down to the wire with 16 needed off the final over. Irfan Pathan was to bowl the last over. However, MSD needed just 4 deliveries to finish the game off, making this one of the IPL best matches.

A cricket fan who follows IPL closely will know the magnificence of Mumbai Indians in nail-biting situations. They are well-known for snatching victory even if the result hangs in the balance, leaning more towards a loss. This started from their match against KKR played on 22nd May 2011.

The equation was down to 40 runs in just 2.3 overs, with the MI fans exiting the stadium disappointedly. Although, with James Franklin on the crease, Mumbai Indians now needed a solid 21 in the final over. The ball was in the hand of L Balaji, who was smashed four consecutive boundaries by the Kiwi followed by a last ball six by Ambati Rayadu. The visitor emerged victorious at Eden Garden, claiming it to be one of the best ipl matches.

The list of the best match in IPL history will certainly be incomplete without mentioning this encounter which took place on 23rd April 2013. Playing for RCB, southpaw Chris Gayle took the Pune Warriors’ bowlers’ to the cleaners by amassing a ginormous score of 175* in just 66 balls. He created records like the most sixes in an innings(17), the fastest century(30 balls), and the highest total by a team at 263 runs. He also took two wickets as RCB restricted PWI at 133-9 and won the match by 130 runs. This knock made this one of the best IPL match ever witnessed. Regarded as one of the best match in IPL history, Rajasthan royals lost a match that was already theirs for the taking. MI was almost entirely out of the playoffs, with this match being the last ray of hope, and they took full advantage. RR scored 189/4 in their 20 overs with MI having to chase the total in and around 14 overs to qualify. For RR, Sanju Samson top-scored with his 47-ball 74.

Mumbai responded astonishingly with Corey Anderson scoring 95 off just 45 deliveries in a historic run chase. The scores were tied at 189 at the end of 14.3 overs, with Ambati Rayudu being run out on the 3rd ball. As per the rules, a boundary of the next ball was the only way to qualify. All eyes were on Aditya Tare who pumped the ball into the stands and handed RR a shocking defeat. Tare ran across the field with his shirt over the head as MI qualified in the top 4.

Another qualifier, another masterclass performance in the IPL. On the night of May 30, 2014, met KXIP and CSK at the Wankhede Stadium. Virendra Sehwag’s astonishing 58-ball 122 helped Punjab get to a massive total of 226/6. With no hopes of qualifying for the final, out walked the CSK openers with Faf du Plessis walking back on the second ball of the innings.

Then walked in Suresh Raina, whose 25-ball 87 got CSK to 100 runs in just 6 overs. Unfortunately, he was run out on the very first ball after the powerplay and the remaining side could only manage to get to 202/7. The ups and downs in this match made it one of the best match in IPL history which could have resulted differently had it not been for the run-out. Over the years, MI have always offered fans a worthwhile performance for their money. They have always performed exceptionally when they are almost at the brink of a loss. An example is the 2017 IPL final, which will always be remembered as one of the best IPL matches. MI were struggling at 79/7 when lower-order batters Mitchell Johnson & Krunal Pandya got the total to 129/8 by scoring some valuable runs. However, with a low total, the chances of winning were quite low.

The match went to the final over with 11 to get. It started poorly with a first-ball four by Manoj Tiwary. Although, with two back-to-back wickets and quality bowling, MI won the finals by just 1 run and etched this match as one of the best match in IPL history.

A nail-biter that was expected by none of the fans at M.A. Chidambaram stadium. As the top order collapsed, Andre Russel walked out and smashed 11 sixes to score a 36-ball 88. This helped KKR put up 202/6 in their 20 overs. Though the sensational knock was another record set, it was overshadowed by a magnificent run-chase by CSK. R Jadeja and DJ Bravo pilled up runs and smashed 17 runs off the final over to help CSK seal the game at 205/5 in 19.5 overs. However, Andre Rusell’s efforts didn’t go in vain as he bagged the player of the tournament award.

It was the night when 22-year-old Alzarri Jospeh replaced Lasith Maling in the MI squad and turned the game into an IPL best match. It was a low-scoring effort by Mumbai Indians as they could only get to 137/7 in 20 overs. The commentators had already deemed it to be an SRH win but MI had other plans. Making his debut in the 4th over of the game, Alzarri sent David Warner packing. After 3.3 overs, his deceptive bowling skills earned him the figure 6/12 which dethroned the previous record of 6/14 by Sohail Tanvir, set back in 2008. His spell of 3.4-1-12-6 helped bundle out SRH for a mere 96 making it one of the best IPL match.

Yet another final fiasco for the Mumbai Indians, and this time it was yet again Dhoni’s XI, just the team was different. Repeating what MI did back in 2017 against RPS, they won the coveted trophy by just one run, adding another title to their tally. Batting first, MI could score 149/8, which wasn't a strong total by the standards of a tournament finale.

However, the likes of Jasprit Bumrah and Lasith Malinga had it all covered and produced magical spells. Bumrah claimed 2/14 in his 4 overs as CSK needed 9 runs off 6 balls to win the trophy. Lasith Malinga redeemed himself from all his bad performances as he took Shardul Thakur’s wicket off the final ball to produce another magical night for MI.

In yet another set of the best match in IPL history, we present the super-over drama between RCB and MI on 28th September 2020. Both the teams were able to pull off an extraordinary performance with the bat as they scored above 200 runs each and tied the game at 201, which later lead to a super over. In this match, as the top order crumbled, MI’s Ishan Kishan proved his worth to the side with an unfortunate dismissal at 99 which took him just 58 balls to score. As the super overcame in play, MI was only able to score 7 runs with the onus now on AB de Villiers and Virat Kohli to get RCB over the line. Kohli rose to the occasion as RCB emerged victorious.

Mumbai Indians are known for their excellent performances in nerve-wracking situations and here is yet another instance. Another super-over drama involving the Mumbai Indians makes it to the list of best ipl matches to have ever been played. Choosing to bat first, MI put a defending total of 176/6 on the board courtesy of a gritty 53 by Quinton de Kock and an outstanding 12-ball 34* by Kieron Pollard.

In reply, KL Rahul rose to the occasion and smashed a 51-ball 71 to level the score at the end of 20 overs. The match is now headed to the super over where Punjab Kings posted 15/0. Unfortunately, MI could only get 11 runs on the board as the three points went to PBKS.

On 24th October 2020, cricket fans across the globe witnessed one such IPL best match played between PBKS and SRH. Punjab Kings scripted a historical win over Sunrisers with the help of some exceptional bowling after a poor performance with the bat. PBKS set a target of a mere 127 for SRH to chase which is more than easy to chase in 20 overs. While chasing, SRH got off to a good start with Jonny Bairstow and David Warner on the crease and needed 17 runs off the final 12 balls with 6 wickets in hand. However, the tables turned in the favor of PBKS as they managed to do the unthinkable. A clinical spell by Ravi Bishnoi and timely wickets by Chris Jordan and Arshdeep Singh brought SRH from 110/4 to 114 all out in a span of 12 balls.

Last but not least, the match of the recently concluded 2022 IPL season. KKR emerged victorious over MI in what was a mind-blowing display of batting by Patt Cummins. Surya Kumar Yadav’s 36-ball 52 and an unbeaten 27-ball 38 by Tilak Varma got MI to a solitary total of 161/4.

KKR had given away one too many runs in the final overs, putting up a target to chase more than they expected. They struggled at 101/5 at 13.1 overs with Andre Russell walking back to the pavilion. With no hope, Patt Cummins walked in. He played an innings like he had nothing to lose and went berserk. He went on to smash a 15-ball 56* to help KKR chase the total in just 16 overs and put MI under immense humiliation. That knock made it one of IPL best match.