What is the longest six in cricket history? While there are countless Youtube videos and skewed historical records on this, there's possibly only one correct answer, although that is likely to change in the coming years with the introduction of the T20 format and the importance of a power-hitter.

Batters shrugged off the safety first approach early on in the innings and a lot of sixes are being hit today not only in a T20 game but also in ODIs and Tests. A score of 300 is no more safe in a 50-over game while Tests are not ending in a bore draw anymore. Clearly, the players built specifically for hard-hitting are most sought after in the T20 leagues as well today.

Such players tend to smack the ball a long way and here we take a look at the longest six in cricket history. Along with that, we will also go deep into the list of longest sixes hit in the history of the sport. Legendary Pakistan cricketer Shahid Afridi is at the top of the list of the longest six in cricket history. During the game between Pakistan and South Africa, Shahid Afridi tore apart the Proteas bowler Ryan McLaren by smacking a whopping 153 metre six. It is the longest six in cricket history as per the official records. It was the third ODI played in Johannesburg and Afridi lit up the stadium with an 88-run knock. Even though his knock came in a losing cause, his 153-metre six became the talk of the town.

Nine years down the line, no player has ever come close to him to hit the longest six in cricket history. However, several other players have managed to stun the viewers with their power-hitting and the next on this list is Australia’s legendary bowler Brett Lee.

Interestingly, this instance happened in a Test match when Australia was all over the visiting West Indies side at the Gabba in Brisbane. Correy Collymore was the bowler at the receiving end when Brett Lee literally smacked a length ball from him out of the Gabba, one of the biggest grounds in Australia. The ball went out of the stadium only to land in the adjacent playing area in the nets. Until Shahid Afridi smacked the longest six in cricket history, Lee owned the record for almost 8 years.

New Zealand veteran Martin Guptill is third on this list smashing a massive 127-metre six off Lonwabo Tsotsobe in a game against South Africa in 2012. It was a brilliant hit from Guptill over the mid-wicket boundary and the ball literally hit the roof of the stadium before landing. 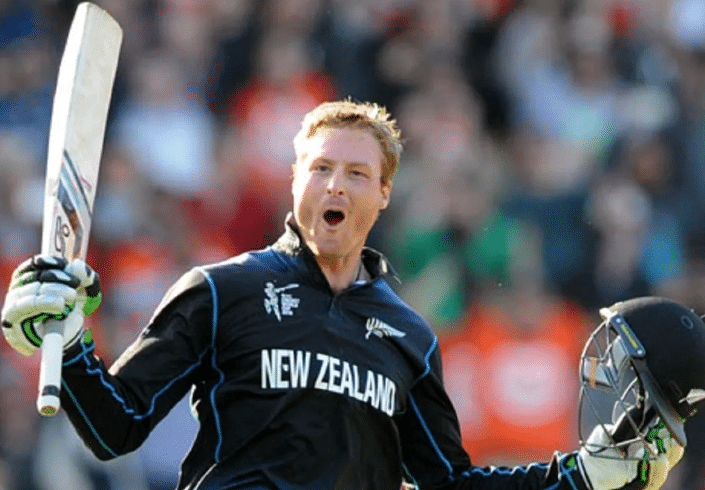 A fierce modern-day hitter Liam Livingstone is a part of this chart and it shouldn’t be a surprise for many. The England all-rounder, who bowls occasional leggies as well, got the better of Pakistan’s fast bowler Haris Rauf during a T20I played at Headingley in 2021. Livingstone got under a length ball from Rauf and stamped his authority on him with a six straight back over the bowler’s head that travelled a massive 122 metres. He managed to score 48 runs in that game and England won that T20I by 45 runs comfortably.

Well, for the first time, India is on this list and unfortunately, the men in blue are at the receiving end. Corey Andreson breathed fire with his batting during an ODI game between New Zealand and India in 2014. Anderson took on Mohammed Shami during the crunch moments of the innings and smacked the ball 122-metre long. Well, Livingstone just equalled his feat after seven years.

Now then, there were some fierce hitters of the ball in the 20th century as well and Mark Waugh was one of them. In 1997, Waugh had sent the Kiwi spinner Daniel Vettori into the stands. It was recorded then that the ball travelled a massive 120 metres that sent shockwaves across the cricketing world. It was then the longest six in cricket history. Two heartthrobs of Indian cricket, Yuvraj Singh and MS Dhoni are next on this list. Yes, the duo ruled the bowlers for more than a decade during their illustrious careers. Who can forget Yuvraj Singh’s assault against England when he smacked Stuart Broad for six sixes in a single over? Well, Australia faced his wrath in the next game of the inaugural T20 World Cup edition in the semi-final. Brett Lee was the bowler this time and the left-handed star who was in purple patch smacked him for a huge 119-metre six. Nevertheless, Yuvraj’s 70-run knock-off just 30 balls helped India win the game and make it to the final. India and Pakistan played out the most thrilling final ever then with the MS Dhoni-led side clinching the trophy in the final over of the game.

Yes, how can MS Dhoni miss this list? Do you remember Dhoni hitting Clint McKay for one of the biggest sixes during an ODI in Australia? Well, then you might not have missed the 118-metre maximum from the former Indian captain which came three years ago. India was on a tour to New Zealand back in 2009. During the Auckland ODI, Dhoni, one of the best finishers of the game, took on the bowlers at will and ended up smashing a 118-metre six with the ball landing deep into the stands.

Shahid Afridi played for so long for his country that he had already made his name on this list before creating history in 2013. In 2005, the legendary cricketer, who is currently Pakistan’s chief selector, launched one into the stands with the ball travelling a huge 118 metres. There were very few moments in the early 2000s when Pakistan dominated Australia in their own den and Afridi certainly gave the fans a few of those moments. He also played a few memorable knocks against the Kangaroos Down Under and clearly, in this game, he played one while smacking one of their bowlers for a massive 118-metre six. Universe Boss is here now. Well, it is surprising that Chris Gayle has hit only the 10th-longest six in cricket history. Nevertheless, at least he is part of this list. The southpaw has smashed 1056 sixes in all T20 cricket he has played so far and is still going strong at 43. Now imagine the kind of power he must have had when he was just 30 years old. In 2010, when India faced West Indies, Gayle stamped his authority on the opposition bowlers. He took on the part-time off-spin of Yusuf Pathan smashing him for a massive 116-metre six and the ball literally went out of the Kensington Oval Stadium.

Albert Troot’s name is never forgotten when the topic longest six in cricket history is discussed. The man is believed to be the only player in the history of the sport to smash the ball over the top of the Lord’s pavilion. The distance, according to the reports was 164 metres then. Unfortunately, there is no official record of the distance travelled and hence, it is not considered the longest six hit in the history of cricket.