The year 2021 witnessed a bumper season of cricket. After a colorless 2020 due to the pandemic, 2021 saw the return of international cricket to its full capacity. While 2021 was majorly dominated by T20 cricket, ODI cricket happened at irregular intervals throughout the year. A lot of focus surrounded the T20 World Cup which was held in the UAE in October-November 2020. With limited ODI cricket that unfolded in 2021, a lot of inspiring performances came to the fore. In this article, we will discuss the Top five bowlers who picked the most ODI wickets in 2021.

Shakib Al Hasan was in decent form with the ball in 2021. The spin all-rounder picked 17 wickets in nine ODI matches for Bangladesh last year. The Asian Tigers played a majority of their games at home in the 2021 calendar year. At the start of 2021, Bangladesh hosted West Indies in a three-match ODI series. Shakib played a crucial role in guiding the team to a 3-0 series win over the Caribbean team. He was the Player of the Series for his contribution with both bat and ball.

Later in the year, all-rounder even played his part in helping his side register a 3-0 away series victory against Zimbabwe. During these nine ODI games, the 34-year old picked a five-wicket haul against Zimbabwe at Haare. It is no surprise that for his all-round skills, Shikab is ranked the No.1 All-Rounder in the ICC ODI rankings for Men's.

Bangladesh had a really successful year in ODI cricket except for their series loss against New Zealand. A lot of their recent success has been contributed by their ever-improving bowling attack. Bangladesh is gradually developing into a nation with enough arsenal in its fast bowling department as well. In the fast bowling department, they are led by Mustafizur Rahman. The left-arm pacer himself had a brilliant year in ODI cricket in 2021.

He picked 18 wickets in ten matches for Bangladesh. He recorded his best bowling figures of 3/16 against Sri Lanka at Mirpur. Rahman has the knack of picking wickets which was quite evident in his career graph which is on an upward scale.

During the Cricket World Cup League 2 stage held in Muscat, Nepal was one of the teams participating alongside the USA, PNG, Oman, and others. Sandeep Lamichhane is a key figure in the Nepal cricket setup. The leg-spinner is renowned due to his availability in some of the popular T20 leagues around the globe including BBL and IPL. 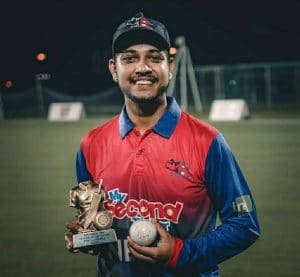 The Nepal-born spinner ranked third in this list of top five wicket-takers in ODI cricket 2021. Sandeep is a rising star and is beginning to master the trade of leg-spin. However, he played just five ODI games in 2021 but picked 18 wickets with an average of just 7.38 during this period. He got two four wicket-hauls and one five wicket-haul along with his best figure of 6/11 in ODIs 2021.

Ireland cricket is gradually making its presence felt in most parts of the world's cricket-following community. A lot of credit goes to their players who have aimed at bringing a change in the perception around Irish cricket. Simi Singh, an Irish off-spin bowler has been a consistent performer for Ireland for quite some time now.

In 2021, they played 13 matches and picked 19 ODI wickets. The 35-year old delivered a total of 104 overs in 2021 including five maidens. Simi Singh got one five wicket-haul with an economy rate of 3.67 during this period.

Sri Lanka's Dushmantha Chameera has picked the most ODI wickets in 2021. Chameera has been a source of inspiration for many young kids in Sri Lanka. He's someone who has raw pace and possesses the ability to rattle some of the best in the world. In ODI cricket in 2021, the pace bowler picked 20 wickets at an average of 29.30.

He's still early in his cricket career and is already adding a lot of value to the Sri Lanka camp. On Sri Lanka's tour of England in 2021, the pacer was highly praised for his effectiveness with the ball in hand. He didn't necessarily generate enough numbers to justify his skillset as a fast bowler for Sri Lanka.

Most Wickets In ODI for India in 2021

India played a total of six ODIs in the 2021 calendar year. Among those games, Bhuvneshwar Kumar picked the most wickets for India in 2021. The right-arm medium pacer got nine scalps in five matches during this period. He recorded his best figures of 3/19 with an overall bowling average nearing 29 in 2021. After Kumar, Shardul Thakur is next on the list with seven wickets for India in 2021.