Who is the King of Cricket? This is a common question among fans at the moment. The simple answer is Virat Kohli. The man has dominated world cricket for a long time now and is the undisputed answer to the question of who is the king of cricket. Ever since he made his international debut, Kohli improved by leaps and bounds and soon ruled the bowlers across the world.

He is also known as the chase master thanks to his excellent record in the second innings of T20I and ODI cricket. Kohli’s records are unparalleled when compared to other current cricketers in the world. He is also being backed to break Sachin Tendulkar’s unthinkable record of 100 international centuries.

Virat Kohli has so far amassed 72 tons in his already illustrious international career. He has smacked 44 ODI, 27 Test and 1 T20I centuries. His maiden century in the shortest format of the sport came only in 2022 against Afghanistan in the dead rubber game of the Asia Cup. Ever since then, he has found his lost form and also played memorable knocks in the T20 World Cup played in Australia. 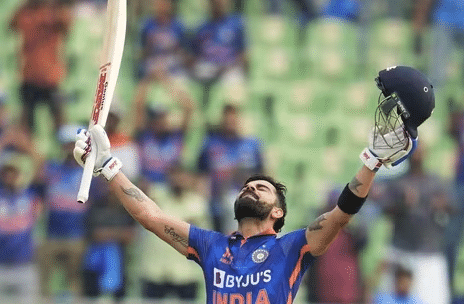 His unbeaten knock of 82 runs off 53 balls against Pakistan is rated one of the best ever in the history of the T20 World Cup, especially in the chases. Undoubtedly, Virat Kohli can be affirmed as the answer to who is the king of cricket at the moment.

Who is the King of Cricket?

Who is the King of Cricket? This question came up when many started calling Babar Azam the same. The current Pakistan captain has been in excellent form over the last few years. However, when it comes to Virat Kohli, Babar has a long way to go. Though he is capable and has age in his hands, Babar Azam will have to be as consistent as Virat Kohli once was during the peak period of his career.

As far as Virat Kohli’s international career is concerned, he made his ODI debut against Sri Lanka in 2008 but it was not until 2010 before he played for India in T20Is. Also, Kohli made his Test debut in 2011 at Kingston in June.

The man has enjoyed a brilliant run in ODI cricket after playing 265 matches in the format. He has so far amassed a whopping 12471 runs at an exceptional average of 57.47 and a strike rate of 93.01. A modern-day great, on the way to becoming one of the all-time greats, Virat Kohli has 44 centuries and 64 half-centuries to show for in ODI cricket.

When it comes to T20Is, Kohli’s consistency comes to the fore. He averages a staggering 52.73 after featuring in 115 T20Is for India and has scored 4008 runs in the format thus far. He has scored a solitary ton and 37 fifties in the shortest format a strike rate of 137.96 is commendable as well. Now comes Virat Kohli’s favourite format, the Tests. He has always given top priority to the longest format of the game and led India admirably well for a long time before stepping down in 2022 post the South Africa tour. As far as his Test career is concerned, Kohli has played 104 matches amassing a whopping 8119 runs so far at an average of 48.90. His recent failures on the Bangladesh tour led to his average dropping below 50.

Kohli has so far hit 27 centuries in the Test format to go with 28 fifties and will be keen on improving his numbers even more in the upcoming years.

But who is the King of Cricket in the world?

Steve Smith is undoubtedly the best in Tests with a brilliant average of 60.58 in 91 Test matches. He has so far scored 8543 runs with 29 centuries and 37 half-centuries. However, when it comes to ODIs and T20Is, the man isn’t the one calling the shots. Perhaps, Australia even dropped him from the playing XI in the shortest formats while one can say that Smith is still a force to reckon with in the ODIs.

The same is the case with former England skipper Joe Root. He has bossed Test cricket over the last two years or so. Overall, he has 28 centuries to his name in Tests to go with 55 fifties after playing 127 matches in the format. He has amassed 10629 runs and is on his way to becoming one of the greatest in the format. However, he last played a T20I back in 2019 and hasn’t played an ODI since July 2022. Though Root is still one of the best in ODIs, he is nowhere close to Virat Kohli in T20Is. The same is the case with Kane Williamson despite the fact that he is one of the class batters going around in modern-day cricket. Virat Kohli – The King of Cricket

Compared to the current fab four, Virat Kohli is certainly the only right answer to who is the King of Cricket in the world.

Another reason why Virat Kohli is a champion player is the way he led India across all the formats. Yes, it is a fact that the team fell short in the ICC events under his leadership but the consistency factor across the majority of bilateral series and especially in Tests cannot be ignored at all.

Virat Kohli enjoyed a considerable success rate as India's captain across all the formats. He led India in 68 Test matches and transformed the entire side in a few years' time. The aggression he instilled in the side was second to none and ended up winning a staggering 39 matches for the country. Interestingly, 15 of those wins came away from home and one of the series wins came in Australia in the 2018-19 season. India lost 16 Test matches under his captaincy and the overall success rate reads a brilliant 58.82%.

The success rate as India captain shot up 68.42% in One-Day Internationals for Virat Kohli. He led the Men in Blue in 95 matches in the 50-over cricket format and ended up winning 65 matches including 29 away and 11 on neutral venues. When it comes to T20Is, Virat Kohli won 30 out of 50 matches as India's captain and enjoyed a success rate of 64.58%.

Virat Kohli, not only led the side admirably, he did it from the front taking up the onus of scoring runs for his side. He smashed 20 out of his 27 Test tons while being India’s captain and ended up scoring 5864 runs in 68 matches at an average of 54.80. He also smashed tons in the SENA (South Africa, England, New Zealand and Australia) countries and averaged over 40 comfortably.

When it comes to ODIs, Virat Kohli smacked 5449 runs at an exceptional average of 72.65 and along with it, scored a staggering 21 centuries. Only Ricky Ponting has more tons than him in the format as captain. In T20Is, Kohli didn’t score a ton as the captain but ended up amassing 1570 runs in 50 matches at an average of 47.57.

A summary of his stunning batting display 🔽 #TeamIndia pic.twitter.com/SWrC5Oanhg

Virat Kohli still has around 3-4 years of cricket left in him and he can certainly take these numbers to the next level. He is currently focusing on ODIs with a World Cup set to be played in India later this year and in Tests, the WTC Final slot is up for grabs and expect the champion player to prove to everyone why he is called the King of Cricket.

Given his fitness, Virat Kohli is certainly a contender to become one of the greatest ever to have played the sport. It will be interesting to see if he manages to complete 100 international centuries and needs 28 more tons for the same. If Virat Kohli hits his peak form again, there is every possibility that he will be able to break the world record and become possibly the best ever batter to play for India and in the world.