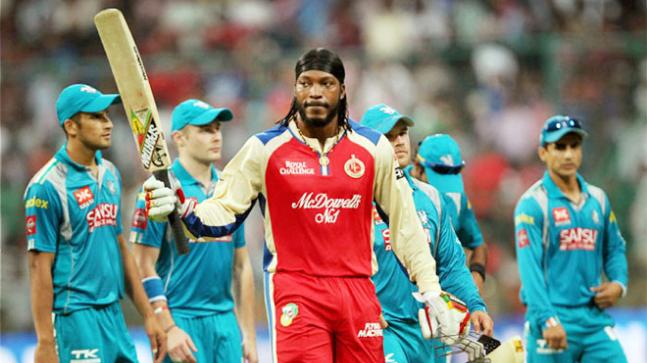 Over the years, IPL has produced some of the best individual performances that the world has ever seen. Be it with the bat or ball, the league primes itself on some of the most brilliant individual displays on the field. In terms of sheer dominance with the bat, there hasn’t been a better innings than Chris Gayle’s 175 in IPL 2013. Gayle’s walloping effort still remains to be the highest score in IPL by an individual.

Here’s a detailed look at the top five highest individual scores in the IPL:

Rishabh Pant is one of the most destructive Indian batsmen in the IPL. The Indian wicket-keeper batsman shot to fame with the hitting prowess while taking up the finisher’s role for the Delhi franchise. In IPL 2018, Pant registered the then-highest individual score in IPL by an Indian with his tremendous power-hitting skills against a potent SRH attack in that IPL season. . The 20-year old tore apart the SRH attack to all parts of the ground to register a personal score of 128* including 15 boundaries and seven sixes in his 63-ball knock.

The young wicketkeeper-batsman was in sensational form throughout the 2018 IPL season. It was Pant’s innings that guided Delhi to a competitive total of 187 after SRH made early inroads in the Delhi top-order leaving the hosts in a troublesome state. However, even Rishabh’s innings couldn’t save the day for Delhi as a Shikhar Dhawan show stole all the limelight as Hyderabad propelled to an easy 9-wicket win. Pant’s rollicking efforts with the bat find the fifth spot on the list of the highest score in IPL by an individual.

KL Rahul has emerged as a majorly consistent and attacking T20 opener in IPL ever since his acquisition with Punjab Kings (then Kings XI Punjab) in 2018. Rahul has made some match-winning contributions while single-handedly taking the game away from the opposition on various occasions. In IPL 2020, while playing the second match of the season against RCB, KL Rahul scored his second IPL hundred while making a bright start to his IPL season. Punjab batted first and got a decent start as both the openers, Rahul and Mayank Agarwal, looked at ease against the RCB attack.

Soon after Agarwal fell, Rahul took the onus and took the attack to the opposition. He rampaged through the gears before staying unbeaten on 132* as Punjab posted a score of 206/3 in their 20 overs. His knock included 14 fours and seven sixes which proved decisive in the context of the game. For his ballistic efforts, KL Rahul was awarded the Man of the Match Award. Rahul’s innings also surpassed Pant’s 128* to record the highest IPL score by an Indian in the history of the league.

AB De Villiers has been one of the most consistent overseas performers in the Indian Premier League. Ever since joining Royal Challengers Bangalore in IPL 2011, the former Proteas player has been a vital cog in the wheel for the ‘Men in Red’. Over the years, Ab De Villiers has played some remarkable innings including his knock against Mumbai Indians in IPL 2015.

It was a typical De Villiers innings when Mumbai hosted RCB at the Wankhede Stadium in a day match in 2015. Walking in at the fall of the first wicket, Mr.360, as he’s profoundly known, stitched an unbeaten 215-run partnership alongside Virat Kohli for the second wicket. De Villiers began slowly before realizing the need for scoring quick runs after reaching his fifty. The inning was an illustration of innovation, power, and delicacy as AB played in his own style to accumulate 133* runs off just 59 deliveries.

He smashed 19 fours and four sixes in his knock to propel RCB to 235/1 in their 20 overs. Even the likes of Jasprit Bumrah, Mitchell McClenaghan were taken to the cleaners as De Villiers didn’t spare any bowler who came up against him on that afternoon in Mumbai.

Brendon McCullum played the most significant innings in IPL 2008 which indeed changed the cricketing landscape in the years to follow. Throughout the course of his IPL career, McCullum was at his destructive best but it was his innings in the inaugural IPL match in 2008 which is held in the greatest regard. Playing for KKR in 2008, McCullum smoked an individual score of 158* against RCB at the M.Chinnaswamy Stadium in the inaugural IPL fixture.

Despite being an unknown commodity in India, McCullum provided a flavor of what could be expected of the slam-bang T20 action in the form of IPL. It was an innings that introduced T20 cricket to India as the tone was set for the rest of the season. The former Kiwi skipper was in beast mode as he didn’t let his foot off the pedal at any stage of the game. His innings included thirteen sixes and 10 fours that lifted KKR to 222/3 in their 20 overs. It remained the highest IPL score until Chris Gayle surpassed it in 2013.

Chris Gayle is one of the most feared batsmen in world cricket. Arguably the greatest match-winner in T20s, Gayle has witnessed his fair share of success in the IPL. With most centuries in IPL history, Gayle also holds the record for the highest individual in IPL. In the 2013 IPL edition, the southpaw played the most destructive IPL innings of all-time with an unbeaten inning of 175* against Pune.

Bangalore hosted the now-defunct Pune Warriors India as Gayle tormented the opposition with shots all around the park. The Jamaican was at his imperious best rampaged his way to a personal tally of 175. It was pure ball-striking combined with huge power-hitting that allowed Gayle to cause havoc on that given day. His innings included 17 sixes and thirteen fours that powered RCB to 263/5 –  the highest team score in IPL history. Till today, Chris’ holds the record for the highest individual score in IPL.