Riding on Virat Kohli and Kuldeep Yadav's brilliance, India took a 2-0 lead in the bilateral series against Sri Lanka. The hosts have been really good in the two games, once notching up a massive total and then bowling Sri Lanka out for a cheap score in the second game. The return to form for KL Rahul is great news for the Indian side as they head to Thiruvananthapuram for the third and final match of the series.

Prediction: India to win the match at 1.20 odds

India have been impressive in the two ODIs so far despite being pushed by Sri Lanka in different ways. In the first game at Guwahati, the team was quick to gauge the favourable batting conditions and made the most of it with a huge total as Virat Kohli slammed back to back ODI tons.

The senior pair of Rohit Sharma and Kohli put on a stand of 144 before Rohit missed out on a cracking ton. Kohli, though, continued unperturbed, getting to his 45th ODI ton in quick time to establish his return to form. Ending on 113 off just 87 balls, Kohli's extraordinary knock gave India a massive total.

In the second ODI, bowling first, India were top notch yet again. This time Kuldeep Yadav stepped up with the ball to win the Player of the Match award, taking a three-wicket haul. Sri Lanka, like with the first ODI when Dasun Shanaka hit a late hundred to launch the fightback, came into the contest too late. They sent back a few key Indian batters, but KL Rahul and Hardik Pandya and later Axar Patel, ensured India walked away with a fairly comfortable victory to seal a series win.

India continue to be the favourites in the third ODI as well and could well complete a whitewash. Their home record against Sri Lanka in ODIs is admirable, having lost only one game in the last 13 years. In the cricket betting odds for today, we have India winning, the odds of which stand at 1.20.

With the series won, India might opt to bring in Ishan Kishan and Suryakumar Yadav for the final game with Virat Kohli and possibly Hardik Pandya taking a game off especially with the New Zealand series also starting next week. However, Kishan may not get to open the batting yet with Shubman Gill likely to be persisted with at the top of the order alongside skipper Rohit Sharma. Todays match predictions have India as favourites despite the likely absence of a few key players. They have strong bench strength and cricket betting tips back India to win this game as such. 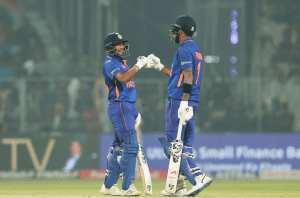 Sri Lanka were without Dilshan Madushanka last match with the left-arm quick injuring himself midway through the first match. That absence is likely to continue for the third game and we could see Sri Lanka play a fairly similar XI for the final game. Nuwanidu Fernando stepped up impressively on debut and is going to continue at the top alongside Avishka Fernando. Betting cricket tips should be free of too many predictions around Sri Lanka players for this match.

There has only ever been one ODI in Thiruvananthapuram with the stadium hosting the 2018 fixture between India and West Indies. On a wicket that encouraged tons of seam movement, India bowled West Indies out for 104 with Rohit Sharma and Virat Kohli putting on a good stand to ease India through in the run chase. The stadium hasn't witnessed much recent activity internationally with the last T20I coming in September last year between India and South Africa. Conditions are likely to aid less seam movement than what we saw last time. The humid, hit conditions should also bring in the dew factor in the second innings, which means that any team winning the toss will want to bowl first.

As far as the weather conditions are concerned, it will get colder in the evenings, but temperatures would still hover around the mid-20s. Conditions will be tougher for batters early on with swing and seam expected. The temperature at the start of the game could go from the mid-30s with it lowering later in the night. There's very less chance of rain too, making todays cricket predictions reliable that way. However discretion is advised for todays match predictions with Kerala's unpredictable weather.