After clinching a close victory over the Strikers, Melbourne Stars will take on the hobbled Melbourne Renegades at the MCG. A disappointing loss for the Renegades has opened up a vital opportunity for the Stars. A win here will send them above their rivals in the table and give them the perfect start to 2023.

The Stars ended 2022 on a high with a nerve-wracking win over the Adelaide strikers. Choosing to bat first, Joe Clarke & Tom Rogers got off the Stars to a good start with the scoreboard at 63/1. The blistering 35-ball 74 knock by Marcus Stoinis got them to a huge total of 186/7. Wes Agar was the pick of the bowlers for his 3/27 for the Strikers. While chasing, they put in a splendid run-chase with Henry Hunt and Adam Hose top scoring with, 49 for the former and an unbeaten 56 for the latter. Rashid Khan pitched in with a quick-fire 14-ball 24* but all in vain as they lost the game by 8 runs.

As for the Renegades, they started the year on a disappointing loss against the Perth Scorchers. Despite Aaron Finch’s heroic 48-ball 65, the Renegades could only manage to put 155 on board, batting first. They were restricted by the variations of Andrew Tye, who picked up 3/32. In reply, Cameron Bancroft’s 32-ball 46 & Josh Inglis’ 34-ball 47 did the trick as Scorchers easily chased down the total. With the ball, Kane Richardson was the stand-out performer for his 2/21.

Meanwhile, the Stars are up against the Renegades in a Melbourne derby faceoff. In their previous encounter, Glenn Maxwell’s 48-ball 65 earned the Stars a triumphant 6-wicket win. Speaking about their head-to-head stats, Melbourne stars have defeated the Renegades in 3 of their last 5 encounters. Overall, the Stars have won 15 games while their rivals have won just 7. In today’s bbl match prediction, we predict Melbourne Stars to win this fixture.

In exciting encounters such as these, we recommend our viewers put their cricketing knowledge to good use. By choosing in-game betting, parlays, matchwinner, and three-way betting, you win rewards and get high returns on investment. Although, we advise all the bettors out there to do their research before placing a bet. 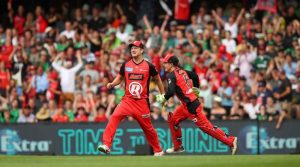 The Stars will be high on adrenaline with their previous win and also have a better track record against their arch-rivals. The team and the fans will have high hopes for batters Joe Clarke & Marcus Stoinis. The former has 348 runs in his past 10 games while the latter has moved his tally up to 193 in 8 games, courtesy of his swashbuckling 74-run knock. As for the bowlers, skipper Adam Zampa will lead from the front as he has bagged 11 wickets in his past 9 games. Matching his wicket tally is Luke wood, who has achieved that in just 6 games. They're a well-balanced side that can demolish any opposition that comes their way.

The Renegades will feel the music as they take on the Stars in an all-important clash. They desperately need this win to stay alive in the contest, which is slowly slipping away for them. They will be heavily reliant on batters Aaron Finch & skipper Nic Maddinson. The former Aussie skipper is the second-highest run-getter of the 2022/23 season with 236 runs in 7 matches, nine short of the top spot. Although, skipper Nic Maddinson has been ruled out by an ACL injury, making way for a new batter to take the onus. This makes it difficult for the ‘Renegades to compete but the bowlers have their back.  Akeal Hosein is among the leading wicket-takers with 12 wickets in 7 games. He will be accompanied by pacer Kane Richardson, who has 6 wickets in 7 games.

There are good chances of rain in the first half of the day. However, there are zero to no chances of rain during match hours. The temperature will fluctuate between 17 to 19 degrees, while humidity will be high at around 60%. Meanwhile, the pitch will be highly favorable to the pacers. There is plenty of bounce on offer, and batsmen seem to struggle on this surface. As the ball comes onto the bat easily, scoring runs won’t be difficult. The average score on this venue is 155 during BBL matches. The toss will also play a huge role in this fixture as the team batting second has won more matches.