It’ll be a reverse match-up for the two teams at the North Sydney Oval. After a high-scoring thriller, the three-time BBL champions will be seeking revenge in what will be a revenge fixture. The Sixers are third on the table while the Brisbane heat lay low at the bottom of the table.

The BBL kicked off the year with a high-scoring encounter between the Sixers and the Heat. The Gabba witnessed a stunning display of batting as Brisbane Heat posted a ginormous total of 224/5. Nathan McSweeney top-scored with his 51-ball 84. Although, it was Josh Brown who stole the limelight with his swashbuckling 23-ball 62. In reply, the Sixers put up a tough fight but fell short of 15 runs. Jordan Silk scored a 23-ball 41 while James Vince replicated his tally in 24 balls to get the Sixers to 209.

For his heroics, Josh Brown earned the man of the match. Although, the three-time champions have won on 13 out of 16 occasions against the Brisbane heat. Despite the loss, the Sixers remain solid on third. In today’s big bash match prediction, we predict Sydney Sixers to be the winners of the following encounter.

These encounters are always filled with adrenaline and we recommend you take full advantage of such occasions. Put your cricketing knowledge to good use and win exciting rewards. Try parlays, match-winner, three-way, and in-game betting to obtain the best returns on investment and gain the best betting experience. However, it is necessary to do your research before you move on to placing your bets. 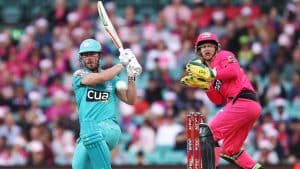 The Sixers won’t be too bothered with this hiccup but would’ve aimed to kick off the year on a better note. However, plenty will be riding on batters Hayden Kerr and Kurtis Patterson, who have been playing key roles for the team. The former has amassed 237 runs in 10 games while the latter has 194 runs to his tally in 8 games. Kerr has been handy with the ball as well, picking up 13 scalps. He will be accompanied by the likes of Sean Abbott, who has been a little expensive but has 13 wickets to his name in 9 games. They’re a destructive side and with the likes of James Vince & Jordan Silk, there’s no stopping them.

Regardless of the win, there will be ample of pressure in the Heats’ camp as they are struggling at the bottom of the table. Batters Jimmy Peirson and hard-hitter Colin Munro will need to firepower the Heat to climb up the ladder. In 9 games, the former has 232 runs at a strike rate of 143. On the other hand, the latter has 219 runs in 7 matches. They have plenty of help in the form of Josh Brown and Nathan Mcsweeney who are in sublime form. As for the bowlers, Micheal Neser and Mark Steketee will play a key role. The former has 14 scalps in his 8 matches while Mark has 11 wickets in his 9 games. The Heats look in good knick but the former champions are known to turn the game around.

There is a good possibility of a thunderstorm disrupting the match hours. Around 70% precipitation has been forecasted with temperatures fluctuating around 23 degrees. Humidity will be constantly above the 70% mark, making it challenging conditions for the players. There hasn’t been plenty of T20 action witnessed at this venue. Although, the average score at this venue batting first is 167 but reduces to 131 going to the second innings. This proves that batting first and getting runs on the board is key. In this big-bash league match prediction, we believe there is plenty of help on offer for the pacers as the match progresses.