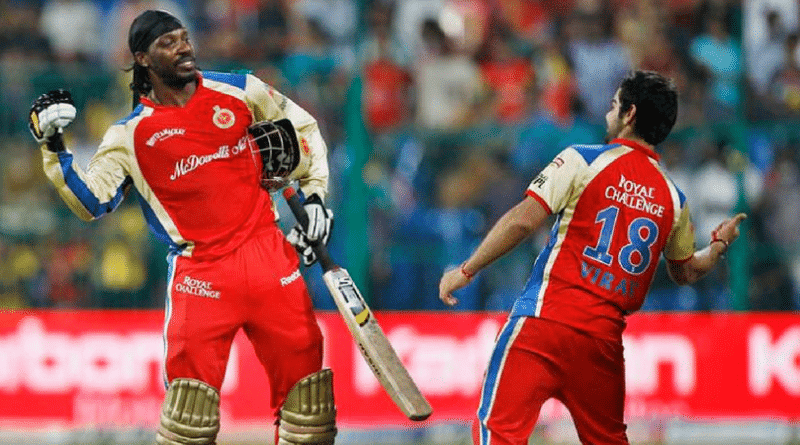 Since its inaugural season in 2008, we have had 13 editions of the IPL and it has become the biggest sports spectacle in India. Over the years, IPL has become very well known for the glitz and glamour associated with it. However, what has also made it famous is the swashbuckling batting one gets to see from the best batsmen around the globe. In this day and age, with the boundaries getting smaller and the bats getting thicker, bowlers are constantly under pressure.

Additionally, with high-scoring matches adding a certain element of entertainment, pitches are often tailored to encourage big hitting. This, in effect, adds up to making the IPL a home of run fests. With totals getting increasingly harder to defend in India, teams batting first look to post mammoth totals on the board. As a result, the record for the highest team total in IPL has been broken often in the past.

Here, we take a look at the list of the five highest team scores in IPL history:

At the moment, Chennai Super Kings (CSK) holds the record for the fifth highest team score in IPL. Punjab Kings hosted CSK in the second match of the inaugural edition of the IPL in 2008. Batting first, CSK posted a huge total of 240 for the loss of 5 wickets. Michael Hussey was the star of the show as he blazed his way to a breathtaking 116* off just 56 balls.

He was well supported by Suresh Raina and Subramanian Badrinath who played vital cameos of 32 and 31* respectively. In reply, Punjab made a valiant effort to chase down the target with the 50s from James Hopes and Kumara Sangakkara. However, the mountain proved to be too difficult to climb as CSK clinched a 33-run victory in their first match of the season.

The two-time IPL champions, Kolkata Knight Riders (KKR), have been a part of some of the most thrilling matches in IPL. Amongst them is the enthralling match played in 2018 between KKR and the Punjab Kings, formerly known as the Kings XI Punjab. The match was played at the Holkar Cricket Stadium where Punjab won the toss and opted to bowl first. The short boundaries, a flat pitch, and the power hitters in the game are three things that make for a high-scoring match.

This match witnessed all three ingredients. Consequently, an aggregate of 459 runs was scored in this match. Quickfire 50s from Sunil Narine and Dinesh Karthik along with a few cameos propelled KKR to 245, which, as it turns out is the fourth highest score in IPL by a team. Punjab started well but lost two wickets in successive balls in the run chase and eventually fell short by 31 runs.

A jam-packed M.A Chidambaram Stadium (Chepauk Stadium) hosted a thriller between Chennai Super Kings and Rajasthan Royals (RR) in 2010. The spectators had their money’s worth as they witnessed CSK blasting their way to the then-highest team score in IPL history. After winning the toss and electing to bat, CSK got off to a flier with Matthew Hayden and Murali Vijay.

Vijay went on to register his maiden IPL century as Chennai ransacked 155 in their final 10 overs. Contributions from Albie Morkel and Hayden saw CSK post a humongous score of 246 at the end of 20 overs. RR got off to a rollicking start in the chase with Naman Ojha scoring 94*. However, some tight bowling saw them lose a few quick wickets in the last quarter of the innings. As a result, Rajasthan Royals were handed a 23 runs defeat by the eventual tournament champions in 2010.

The 44th match of IPL 2016, saw Virat Kohli led RCB absolutely demolish the Gujarat Lions at the M.Chinnaswamy Stadium. After being put in to bat by the tourists, the home team didn’t witness the greatest of the starts after losing Gayle early. However, AB De Villiers and Virat Kohli stitched a memorable partnership of 229 runs for the second wicket. This became the second-highest partnership in IPL history.

Furthermore, both Kohli and De Villiers went on to complete their respective 100s as the former smashed 5 sixes in an over off the bowling of Shivil Kaushik. Ultimately, RCB posted a target of 249 runs which happens to be the second-highest score in IPL by a team. Chasing a mammoth total, Gujarat Lions lost early wickets and were eventually bundled out for only 104. Chris Jordan and Yuzvendra Chahal were the wrecker-in-chiefs picking 7 wickets between them. This victory by RCB is also the second greatest win in IPL in terms of run margin.

Even though RCB hasn’t been able to get their hands on that elusive IPL trophy, they have been participants in some of the most historic matches in the history of the competition. In 2013, the game against the now-defunct Pune Warriors was one of the most memorable IPL matches. The Chinnaswamy crowd in Bengaluru witnessed the Gayle storm as he blitzed his way to 175* – the highest individual score in IPL.

RCB posted a huge total of 263/5 on the back of Gayle’s empowering innings. This score by RCB is the highest ever score in IPL by a team. Dejected by the carnage, Pune Warriors could only score 133 runs in the second innings. Gayle, Jaydev Unadkat, and Ravi Rampaul picked up two wickets each as RCB won by a margin of 130 runs.