Rohit Sharma is one of the most popular names in Indian cricket. The Indian vice-captain has witnessed immense success on the field in the last few years. The Mumbaikar has also been a very successful captain in the IPL for Mumbai Indians. Ever since his marriage in 2015 with Ritika Sajdeh, Rohit Sharma has often credited his wife and family for helping him stay in a positive frame of mind.

Like most cricketers, Rohit is accompanied by his wife and daughter on most tours and matches. Ritika Sajdeh is spotted quite frequently at the IPL games for MI. The couple has also been seen holidaying at various locations during Rohit's time off cricket.

Just like her husband, Ritika has expressed her concerns and love for the animals. Through her various social media posts, she has always conveyed the message to show love and care for the animals. Her hobbies are traveling and water sports. 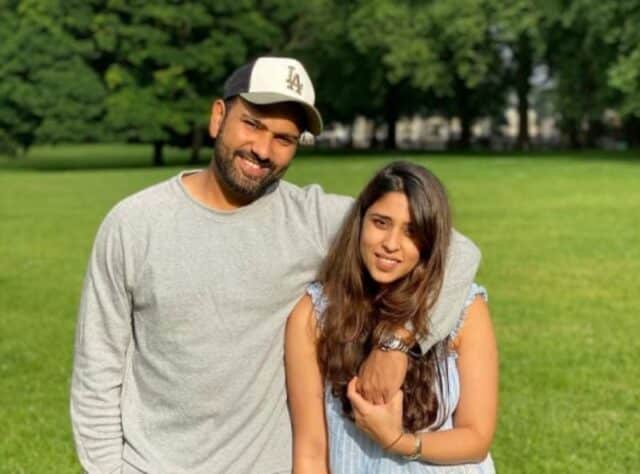 What Does Ritika Sajdeh do?

Ritika Sajdeh is a Sports Manager, someone who manages brand endorsements for sports personalities. She was a sports enthusiast from her childhood days and thus was inclined towards pursuing a job in the same profession. Ritika Sajdeh has been managing sporting engagements for a company called Cornerstone Sport and Entertainment. The company's owner is her cousin Bunty Sachdeva.

However, ever since marrying Rohit Sharma, Ritika has been managing her husband's contracts, endorsements, and looking after his off-field stuff.

How did Rohit Sharma meet Ritika?

While working for her company, Ritika met Rohit Sharma at one of the sporting events for Reebok in 2008. The duo was introduced by Yuvraj Singh, who happens to be Ritika's rakhi-brother and Rohit's former India teammate. It was soon that the two became best friends and began dating each other. Later, Ritika started managing Rohit before they tied the not in 2015.

After dating for nearly six years, Rohit Sharma and Ritika Sajdeh got engaged in June 2015. Six months later, the couple married on December 13, 2015. It was a star-studded wedding hosted at Mumbai’s Taj Lands Hotel.

The couple was even blessed with a baby girl after 3 years of their marriage on 30 December 2018. They named her Samaira. Both Rohit and Ritika enjoy some quality time with their daughter when away from home and on tour.