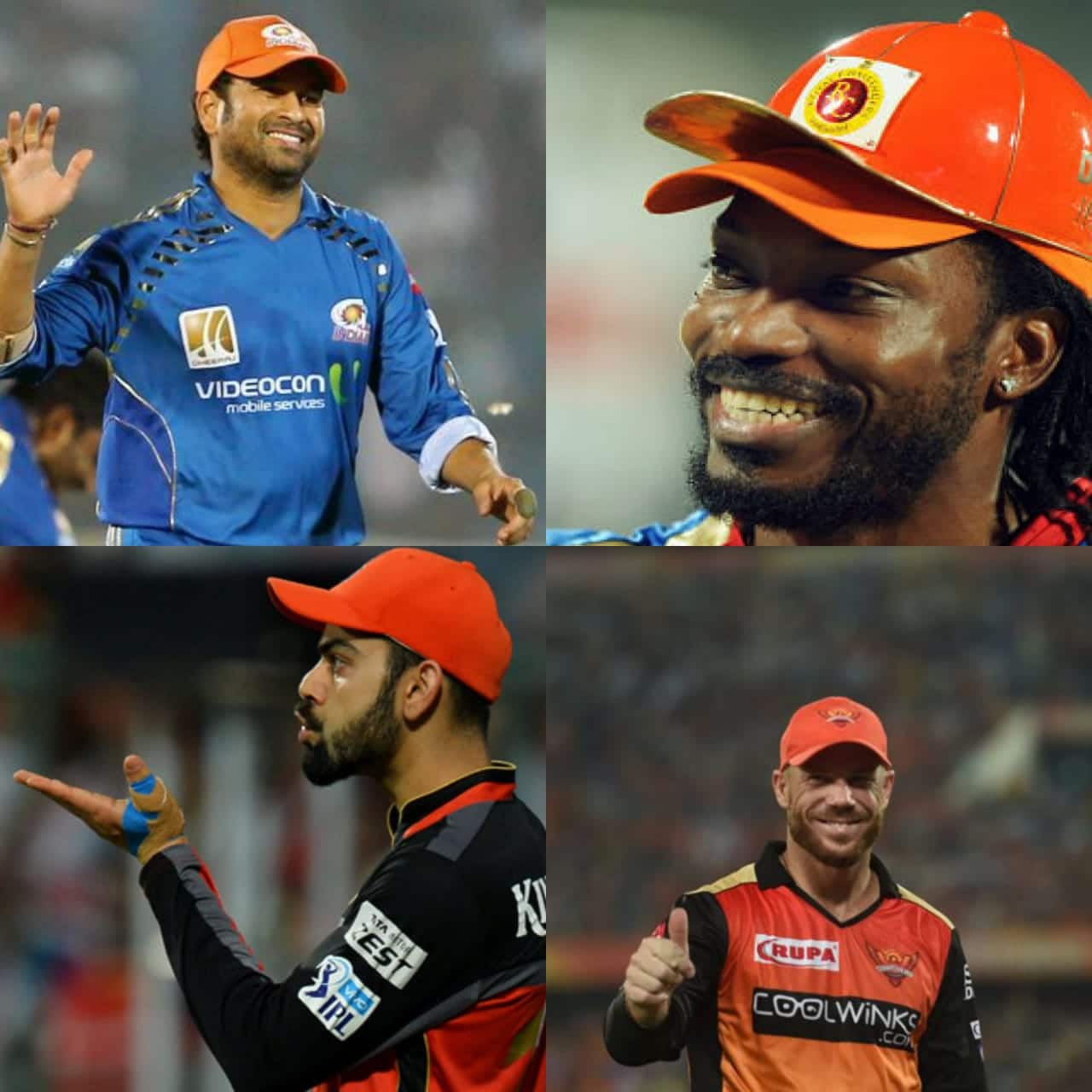 Every year in the IPL, Orange Cap is presented to the highest run-scorer in that particular edition of the league. Over a course of two months, the most consistent batsman often bags this honor at the end of each season. In the past twelve years of the IPL, David Warner has won the Orange Cap thrice in his IPL career. Amond Indians, only Sachin Tendulkar, Virat Kohli, Robin Uthappa, and KL Rahul, have managed to get their hands on the elusive trophy.

In the inaugural edition of the league, Australian cricketer Shaun Marsh scored the most runs in IPL 2008. Playing for Kings XI Punjab in 2008, Marsh slammed 616 runs to become the first cricketer to win the Orange Cap in the history of the Indian Premier League. Marsh’s tally of 616 runs in 11 matches included a swashbuckling century and five fifties to top the run-scoring charts in IPL 2008.

In 2009, the Indian Premier League (IPL) was shifted to South Africa due to the staging of General Elections in India. Matthew Hayden emerged as the highest run-scorer in IPL 2009, scoring 572 runs in 12 matches. Playing for Chennai Super Kings, Hayden led the charge with some mesmerizing batting display at the top of the order for the ‘Men in Yellow’. In 12 games, Hayden scored five 50+ scores at a strike rate nearing 150 in the entire season.

Indian Premier League was welcomed back to India in 2010. It was the first season when an Indian scored the most runs in an IPL edition. Sachin Tendulkar, leading his franchise Mumbai Indians in the edition, smashed 618 runs in 15 matches for his team. The Master Blaster helped his team to reach the finals before they bowed out against a dominant CSK outfit. However, it was a great outing for Sachin as he became the first Indian ever to win Orange Cap in an IPL season.

In IPL 2011, after failing to entertain any bid in the IPL auction, Chris Gayle was included in the RCB squad as a replacement for Dirk Nannes. It turned out to be a dream decision for the Royal Challengers franchise as Gayle proved to be the most impressive player for them in IPL 2011. Riding on his great form, Gayle scored 608 runs in 12 matches batting with an average of 67.55. He smashed two centuries along with three fifties to emerge as the highest run-scorer in 2011. He won the Orange Cap award despite Bangalore failed to cross the final hurdle in the IPL Final 2011.

Gayle continued his swashbuckling form even in IPL 2012, he began the season on a high and continued to be a headache for the rest of the teams. He carried on from where he left in IPL 2011. The Southpaw registered the then highest runs for any batsman in an IPL season. In IPL 2012, Gayle topped the scoring charts with a record-breaking 733 runs in 15 matches for RCB. With a personal best of 128*, Gayle smacked seven fifties at a staggering strike rate of 160. It was the first time when an Orange Cap winner scored more than 700 runs in a season.

Known as Mr. Cricket, Michael Hussey was at his imperious best in the entire IPL season in 2013. The Southpaw from Australia opened the innings for Chennai Super Kings in IPL 2013. He, along with Murali Vijay, were instrumental in providing some brisk partnerships at the top of the order for CSK. Hussey made full use of his top-notch form and bagged the Orange Cap in IPL 2013. He finished with an aggregate of 733 runs in 17 matches that he played for the Dhoni-led franchise. His tally of 733 runs included six half-centuries for his team.

Uthappa, batting at the top of the order, added immense value to the KKR setup. He was the chief architect in guiding his team over the line on most occasions in 2014, He ended the season with 660 runs including five fifties. It was a memorable season for KKR as they defeated Kings XI Punjab in the IPL final to lift their second IPL trophy.

David Warner has been at the heart of success for Sunrisers Hyderabad in the past few years. The Australian cricketer has led the team from the front. In IPL 2015, Warner did the bulk of scoring for his team. Opening the innings for the Orange Army, Warner scored 562 runs in 14 matches at a strike rate of 156.54. Warner smashed 7 half-centuries but failed to take his team any further from the group stages. SRH finished sixth on the points table while Warner bagged the Orange Cap in the eighth edition of the IPL.

It was a season that was ruled by RCB skipper Virat Kohli from the onset. Kohli, who was going through a purple patch leading into the IPL, made the most of his form to make hey in IPL 2016. Not only did he scored the most runs in 2016, but he also broke a number of records in the IPL history.

Kohli’s unreal tally of 973 runs in merely 16 matches saw him take down some of the finest bowling attacks in the season. He registered 4 centuries in a single edition and also went past the highest tally of runs in a single IPL season. He took RCB to the finals before Sunrisers edged out by 8 runs to clinch a high-scoring thriller in Bengaluru. It was fitting that Virat Kohli won the Orange Cap in IPL 2016.

After riding his team to their maiden IPL win in 2016, skipper David Warner continued to reign supreme with his ballistic form even in IPL 2017. Warner scored 641 runs in 14 matches for Hyderabad. He once again guided his team to the last four before crashing out against Kolkata Knight Riders in the Eliminator clash. The 34-year old racked up 4 fifties and a century to complete yet another successful season for himself. He won the Orange Cap for the second time in the last three years at the IPL.

Taking over the captaincy reins from David Warner in IPL 2018, Kane Williamson not only delivered as a leader but also allowed his bat to do all the talking. Leading from the front. Williamson emerged as the highest run-scorer in the tournament of 2018. He finished with 735 runs from 17 matches, scoring them at an SR of 142.44.

He carried his team’s batting all the way in the tournament and led them to the final against CSK in IPL 2018. It was a memorable outing for the Orange Army until they were battered by a Shane Watson blinder in the IPL Final 2018. For his breakthrough IPL season, Williamson was awarded the Orange Cap.

After returning from a one-year ban, David Warner never looked out of sorts in such a high-pressure environment in the IPL. Batting at the top, alongside Jonny Bairstow, the two formed the best opening duo in IPL 2019. In 12 matches, Warner scored a record-breaking 692 runs to lead the race for most runs scored in IPL 2019.

It was fitting that he bagged the Orange Cap in IPL 2019 for his unreal batting performance in the entire IPL. In 2019, Warner also crossed the tally for most runs by an overseas player in the IPL history. He also became the first player in history to win a record – three – Orange Cap in the IPL. However, SRH failed to cross the final few hurdles but it was a season to remember for their star opener in IPL 2019.

KL Rahul captained Kings XI Punjab in IPL 2020. With an added responsibility, Rahul led from the front and scored the majority of runs for Punjab in 2020. Despite a middling season for KXIP, Rahul didn’t allow it to affect his personal performances. The opening batsman was at the top of his game as he emerged as the Orange Cap holder at the end of IPL 2020.

With a total tally of 670 runs in just 14 matches, Rahul did the bulk of the scoring for KXIP at the top of the order. His exploits in IPL 2020 included five fifties and a remarkable century scored against RCB. With another 500+ runs scored in 2020, Rahul achieved a remarkable feat of scoring more than 500 runs in three consecutive IPL seasons. Ever since joining KXIP in IPL 2018, Rahul has crossed the 500-run mark in each IPL season.